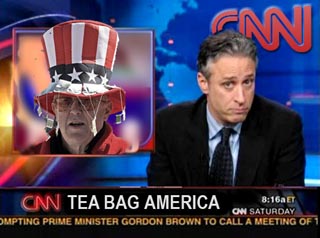 Now that Campbell Brown has announced that she will be signing off of her CNN show, CNN has an opportunity to advance the state of journalism. They are the network that claims to be the champions of straight news and they dismiss the partisanship that is so deeply ingrained in Fox News and, to a lesser extent, MSNBC. So if they are serious, they need to take a long, hard look at themselves and begin to construct the sort of ethical news enterprise to which they claim to aspire.

The first thing they need to recognize is that they presently have no exclusive claim to being non-partisan. The only difference between them and their competition is that their hosts are not overtly partisan. But the substance of many of their programs is just mashed together panels of left and right pundits who argue with one another. That’s not non-partisan, it’s multi-partisan. More importantly, it’s not journalism.

If they are serious, CNN needs to fill this timeslot with a program that doesn’t seek to attain some sort of fabled balance. Balance is a phony metric. Journalism is not served when you balance reporting about say, the dangers of cigarettes, with a segment about how smoking cures cancer. The standard should not be balance, it should be truth.

One of the best examples of truth-telling in the media today is The Daily Show. Sure it’s funny and the correspondents are clowns (which is something they have in common with Fox News correspondents), but there is a determined effort to cast aside bullshit and back up their humor with facts. The technique of juxtaposing video of a politician making contradictory statements was a Daily Show innovation that has been picked up by some “real” news programs.

Am I seriously proposing that The Daily Show replace Campbell Brown? Let’s just say that I’m only half joking. It’s important to note that The Daily Show is not a news information show, in that it is not a collection of reports about what happened during the day. There is a presumption that their viewers already know what’s going on. It is also not political satire. It is media satire. Almost every segment is about how the media covers stories rather than the content of the stories themselves.

I think that a daily program that addresses the way news is presented would be a welcome addition to CNN’s schedule. By eight o’clock in the evening there has been plenty of time to observe and critique the reporting that occurred during the day. If they need additional time they could do the previous day. This would be more than a dry exercise in fact-checking. While taking a more sober tone than Jon Stewart, it could still be a raucous affair that would be both fun and enlightening. They could use dynamic and fast-paced Entertainment Tonight style graphics and charming, but well informed, hosts. They could even bring in special correspondents on occasion (I would recommend Stewart or other actual Daily Show personalities).

This show could provide true competition to the O’Reilly/Olbermann/Grace block that dominates the time period. It could also be a bellwether program that holds the media feet to the fire. They would have to play fair and include CNN’s flubs. Preferably it would be produced independently. But if they executed it right, I think many viewers would find it a refreshing change from the shoutfests on the other cable nets. Then CNN could use it to anchor a slate of truly responsible newscasts.

The only question is: Are the program executives at CNN smart enough to listen to me? Of course, they probably don’t even know I exist. Consequently, look for CNN to add another interminable hour of John King.

What on earth is it going to take to get rid of this persistent falsehood that Fox is only slanted right in primetime? So much of the recent squabble between the White House and Fox is predicated on this easily refuted premise. If it were only O’Reilly and Hannity spewing their nonsense, the President would likely have never mentioned it. But the bias is firmly integrated throughout the day’s programming and is presented as news.

“Just as Fox News leans to the right with their opinionated hosts in primetime, MSNBC leans left. I don’t think anyone at Fox or MSNBC would disagree with that.”

In addition to perpetuating the primetime myth, Brown conveniently forgets that three hours in the morning on MSNBC are given over to a conservative Republican, former congressman, Joe Scarborough. But more to the point, a quick look at Fox’s schedule reveals the lie that seems to be invincible. But here is the truth:

This troubling tunnel-vision can only make things worse. It gives Fox a pass on their most egregious violations of journalistic ethics. And it makes reports like yesterday’s announcement that White House press secretary Robert Gibbs met with Fox News executive Michael Clemente, seem useless. What could they discuss of substance if such a large chunk of the truth is waived off.

I wonder what they would discuss anyway. The gossip in the press is that a truce was on the table. Really? Does that mean that, in exchange for refraining from calling out Fox, Glenn Beck would stop calling everyone in the White House a radical Marxist? Will Sean Hannity stop finding corruption in everything from the Olympics to the Nobel Peace Prize? Will Neil Cavuto stop implying that every jump in the stock market is due to the tea baggers and every dip is Obama’s fault? How would the Fox audience respond to the revelation that Fox agreed to moderate their prejudices in an effort to make nice with the President?

Media Matters has established a method of distinguishing between a legitimate news organization and a propaganda dispenser. Here is an abridged sampling:

Now we just have to get the Campbell Browns of the world to pay attention and recognize reality.