These freakin’ slimeballs at Fox Nation continue to demonstrate that they have no morals whatsoever. Not to mention no integrity, honesty, or decency. They will take any grotesque episode, no matter how far removed from President Obama, and attach it to him by some depraved, alien logic. Take this for instance: 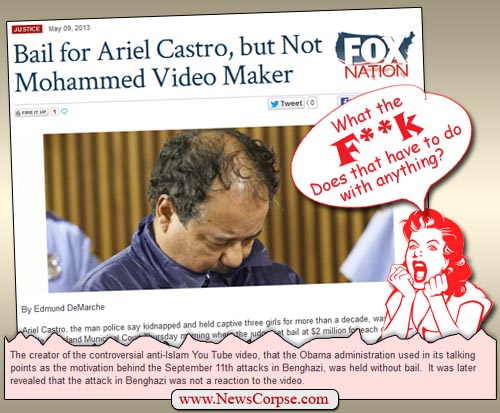 The original article referenced by Fox Nation was from their own Fox News via the Associated Press. It reported on the arrest of Areil Castro, the charges against him, his bail, and went into some detail about the alleged crimes.

For some reason, Fox Nation focused on the one sentence in the 700+ word article that mentioned Castro’s bail. But even more baffling was their insertion of this paragraph:

“The creator of the controversial anti-Islam You Tube video, that the Obama administration used in its talking points as the motivation behind the September 11th attacks in Benghazi, was held without bail. It was later revealed that the attack in Benghazi was not a reaction to the video.”

That text was not anywhere in the original article. It was composed entirely by the Fox Nationalists and inserted into the story without any disclosure that they had fabricated it themselves. It obviously has nothing to do with the story and sticks out for its surreal irrelevance.

For the record, the filmmaker, Nakoula Basseley Nakoula, was arrested for allegedly violating terms of his probation. The judge, citing probation violations including lying to probation officials, ordered him held without bail, a common occurrence under these circumstances. He pleaded guilty to four of the charges against him and was sentenced to one year in prison and four years of supervised release.

[Update: Fox News is now actively defending this filmmaker who they portray as a “patsy” of the Obama administration] 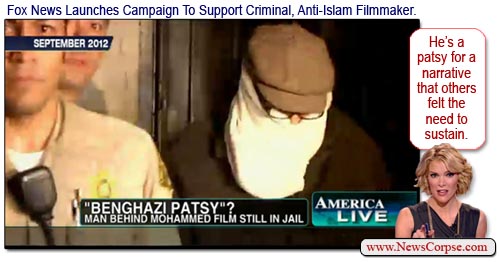 So what was the point that Fox Nation was making by embedding this extraneous content into the article? Clearly they were drawing some sort of deranged parallel between Obama, Nakoula, and Castro. Perhaps their purpose was to imply that Obama personally interceded to insure that Nakoula was held incommunicado to keep him from exposing Obama’s covert plot to promote the video and inspire a global Islamic uprising. Or maybe Fox was attempting to suggest that Obama had some sympathy for Castro and secretly engineered his bail (at only $8 million). Or maybe Fox just hadn’t written the word “Benghazi” in the past five seconds and thought this would be a good time to slip it in again.

What on earth are these imbeciles thinking? They just lost a historic election that they were convinced would be a cake-walk for the GOP. They underwent what they themselves called a “postmortem” analysis of their epic failures. They were named the “stupid party” by one of their most prominent governors. And yet they are still resorting to the sort of idiocy and extremism that has earned them the lowest favorable ratings in history.

And this wasn’t even the only incident of Castro-izing Democrats today. On Fox’s America Live with Megyn Kelly, their conservative contributor Chris Plante inexplicably said that “Ariel Castro might get the ‘hospitality of the year award’ from the Democrats in Congress.” What unholy orifice did he pull that from?

This is evidence that Fox News and their GOP pals have learned nothing from the 2012 elections. It also proves that they are a gaggle of repulsive and childish mental deficients with no discernible honor or even the common civility that would permit them to go out in public among decent people. Where the fuck does it stop with these cretins?

And not to be left out. the “Moonie” Washington Times joined in with this asinine crap: 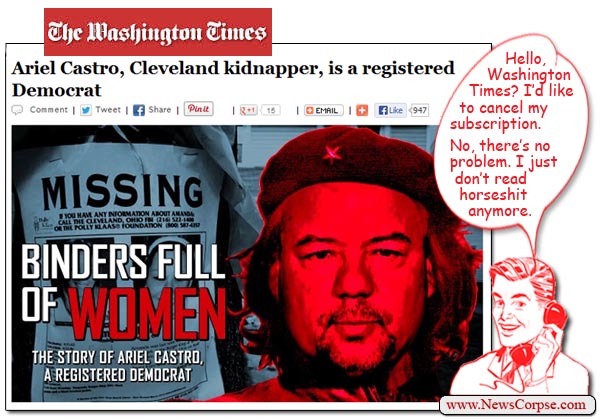 There are times when you hear some Tea Party birther spew nonsense that is just plain delusional and you think, “How can anyone believe that?” Then there are times when what you hear is so astonishingly stupid that you’re afraid that your jaw will never reset and remain permanently disjointed from having dropped so hard.

On today’s radio broadcast of conservative Chris Plante, a caller named “Mike” spun a tale that would have made for a great parody, except that he is being taken seriously by wingnuts and conservative media. He told Plante that he was on a bus, one of four buses, that were on their way from Michigan to Wisconsin. He said that the purpose of the convoy was to transport out-of-state Michiganders to Wisconsin so that they could illegally cast votes for Democrat Tom Barrett for governor. Mike said, however that he was planning to voter for Scott Walker.

There was absolutely no proof that any of what was said by this anonymous caller to a talk radio show was true. However, there are some pretty good reasons to dismiss his allegations as cheap theatrics and lies. Not the least of which is the fact that these alleged phony voters would not be able to cast ballots in Wisconsin without having previously registered and provided ID with proof of residency. They could register at the polling place and cast provisional ballots, but they would not be counted until after the voter returned with the required residency ID. So Mike’s account of this road trip, if it were true, could not be anything more than an expensive boondoggle to blow a pile of cash on four chartered buses and, according to Mike, food and other “freebies,” so that a bunch of dopes from Michigan can waste a few hours on the highway.

Additionally, Mike’s assertion that he was calling from one the phantom buses was debunked briefly by Plante himself. Plante wondered how Mike, who could not be listening to the radio show while on the bus, knew that Plante was talking about the Wisconsin election when he called in. Mike’s stumbling attempt at an answer was that Plante always talks about that. It would also be pretty difficult for Mike to have this conversation with a right-wing radio host while sitting on a bus full of Democrats who were on their way to break federal laws. And, by the way, that is what Mike confessed was his intent as well. So he was admitting on the air that he was a co-conspirator in a plot to commit felony voter fraud.

It would have been bad enough if this foolishness ended right there on Plante’s radio program, but no such luck. Fox News picked up the story and posted it at the top of their Fox Nation web site with a headline that doesn’t question the veracity of the “eyewitness:” EYEWITNESS ALLEGES DEMOCRAT UNION VOTE FRAUD IN WISCONSIN. 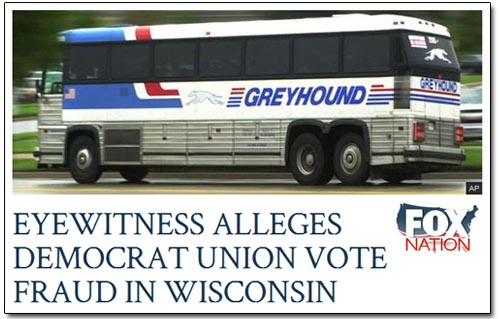 The Fox Nationalists don’t bother to put a qualifying adjective in front of the word “eyewitness,” but they have no problem accusing Democrats and unions of voter fraud, even though the only evidence of any fraud was via the confession by a Republican named Mike.

In all likelihood this call originated from the flea-infested sofa on the back porch of Mike’s mother’s trailer somewhere in rural Mississippi. Mike probably spun this story while chugging a Bud and waiting for his cousin/wife to let him know the next batch of meth was ready. And Chris Plante bought it. And Fox News bought it. And who knows how many dimwits who pay attention to those pathetically dishonest sources went right along with whatever they were told.

This is one of those moments of idiocy that will stand out when the Idiocy Hall of Fame makes their next round of nominations. For Fox News to treat this a credible content, and to report it as if it were news, really says all that is needed to be said about Fox. They are not merely a collective of partisan liars, they are blithering ignoramuses who probably should not be allowed to use kitchen utensils unsupervised. And their audience…..oh forget it. It hurts to think about it.