Media Matters published an interesting study that reveals just how dismissive Fox News is of professional journalistic standards. On the day after the devastating earthquake in Haiti, Fox News practically ignored it on its most watched programs.

While this isn’t particularly surprising, at this difficult time it is definitely disturbing. This is not just another sad disaster on foreign soil. There were reportedly 40,000 Americans in Haiti at the time of the earthquake. But even that isn’t enough for Fox to take it seriously.

“On January 13, Fox News’ three top-rated programs for 2009 — The O’Reilly Factor, Hannity, and Glenn Beck — devoted a combined total of less than 7 minutes of coverage to the earthquake in Haiti, instead choosing to air such things as Beck’s hour-long interview with Sarah Palin, Bill O’Reilly’s discussion of Comedy Central host Jon Stewart, and Sean Hannity’s advocacy for Massachusetts candidate Scott Brown’s Senate campaign. By contrast, the content of MSNBC’s three top-rated shows underscored the significance of the Haiti disaster; Countdown, The Rachel Maddow Show, and Hardball devoted a total of more than two hours to the earthquake.”

So when Fox isn’t exploiting the tragedy for political gain, they try to ignore it altogether. At Fox News, if a story can’t be twisted to attack liberals or promote conservatives, it isn’t news. By making an editorial decision to feature Sarah Palin and Tea Bagger Senate candidates, rather than breaking news on urgent events in a neighboring country, Fox is admitting that their purpose is to proselytize for an agenda – not to inform.

For a network that spends so much time boasting about their ratings, they are abusing their position in the market by keeping their multitude of viewers in the dark on this important matter. But that is nothing new for Fox, whose mission has always been to advance the ignorance of their audience. And they get better at that every day.

The headline on Fox Nation today shouts that: Pres. Obama Reacts to Haiti Earthquake Faster Than Christmas Bomber. How typical of Fox to turn a tragedy into a trivial partisan attack.

News Flash to Fox Nation: The Crotch Bomber succeeded in blowing up nothing other than his own loins. He was quickly subdued. The plane suffered no damage. There were no casualties amongst the passengers. He was taken into custody without incident and he remains incarcerated. Moments after the event there was no imminent risk to anyone on the plane or elsewhere. There was no reason to rush a response to the Crotch Bomber because the threat had been neutralized.

On the other hand, Haiti was struck by the worst earthquake the region has experienced in over two hundred years. Thousands may be dead, and thousands more in peril. Fast action is necessary and will undoubtedly save lives. The risk is severe and ongoing. But all the Fox Nationalists care about is politicizing the catastrophe and castigating the President for responding with appropriate urgency.

What a despicable bunch of cretins. Perhaps they would be happier with the Bush model that left New Orleans stranded, desperate, and dying, in the critical hours after Katrina.

At least the view from the right is thoroughly consistent. If a few air travelers (and wealthy airlines) are briefly threatened by an incompetent, wannabe terrorist, drop everything and rush off to Detroit. But if it’s an entire population of dark-skinned, poor people who are in danger, let them suffer. After all, as Rush Limbaugh said of the Haitian people this morning, “They produce zilch, zero, nada.” Therefore, there is no reason to extend any humanitarian services to alleviate their suffering. Or as Pat Robertson said, they brought it on themselves because they “swore a pact to the devil.” See? These lazy Satanists are just getting what they deserve. 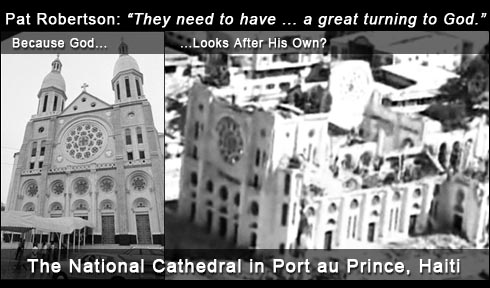 For those who are not despicable rightist cretins, you can donate to Haitian relief efforts here:
International Committee of the Red Cross
Doctors Without Borders
Oxfam International