This past weekend there was a media feasting on a few poorly chosen words by CNN commentator Hilary Rosen. Although Rosen is not a representative of President Obama’s administration or campaign, the President and his staff was hounded for reactions and responses to her comments. Republican operatives and media flacks spent countless hours falsely asserting that Obama was in some way responsible for Rosen’s opinions.

OK then, let’s have some fairness and balance. This weekend another political partisan had a few things to say about the upcoming election. Washed-up, geriatric rocker, Ted Nugent appeared at the NRA conference in St. Louis and what he had to say ought to have similar repercussions for Romney. His unhinged rant was an onslaught of invective wherein he called the President and others in the administration “evil” and “vile,” and he spoke of his desire to oust “the enemies in the White House.” Here are a few more choice moments from his psychotic spewing:

These remarks run the gamut from merely disrespectful to hostile to treasonous. And this is not coming from an unassociated cable news talking head, Nugent is a Romney advocate whose endorsement Romney purposefully solicited. Last month Nugent Tweeted his support after a personal call from Romney:

At the time I wondered whether the media would hold Romney accountable for actively seeking the endorsement of a psychopath who has threatened the President and others with assassination. Apparently the media wasn’t interested. However, after the press’ mobbing of Rosen you might think that they would expect similar responses from Romney for what his campaign surrogate says.

The differences in the way that the press handle these situations should put an end to any talk of the so-called liberal media. Nugent’s violent and revolting rhetoric (which he means sincerely) far exceeds the comparatively tame opinions of Rosen (which were misconstrued). And Romney ought not to be allowed to evade questions on the matter.

[Update] New York Magazine contacted the Secret Service with regard to Nugent’s threats and they confirm that “We are aware of it, and we’ll conduct an appropriate follow up.”

Here is a highlight reel of Nugent’s remarks (and if you have the stomach for it, here is the whole thing [Note: The NRA has removed this video]).

Leave it to Fox News to leap on a political molehill and start shoveling feverishly in the hopes of building a mountain.

Yesterday Hilary Rosen, who works for a democratic public relations firm, appeared on CNN and made the mistake of not parsing every single word she said before opening her mouth. The result was a firestorm of criticism aimed a short immaterial phrase that is hardly representative of her full statement. Here is what Rosen said with the part conservatives have latched onto in bold:

“With respect to economic issues, I think actually that Mitt Romney is right that ultimately women care more about the economic well-being of their family and the like. But he doesn’t connect on that issue, either. What you have is Mitt Romney running around the country saying well, you know, my wife tells me that what women really care about are economic issues, and when I listen to my wife, that’s what I’m hearing. Guess what? His wife has actually never worked a day in her life. She’s never really dealt with the kinds of economic issues that a majority of the women in this country are facing in terms of how do we feed our kids, how do we send them to school, and why we worry about their future.”

Clearly Rosen was addressing the absurdity of a wealthy housewife assuming the role of Home Economics expert and pretending that she relates to people who have to struggle to make ends meet. Nothing in her comments suggests that she was talking about the difficulty or the satisfaction of raising children. But that’s how the right is spinning this matter, and they are spinning it as hard as their little gerbil feet can spin.

Take a look at the coverage on Fox News where it was the headline story. And their wingnut affiliate, Fox Nation, has posted at least seven articles on the subject – more than any other topic including the presidential election, the Trayvon Martin shooting (and Zimmerman’s arrest), the economy, etc. 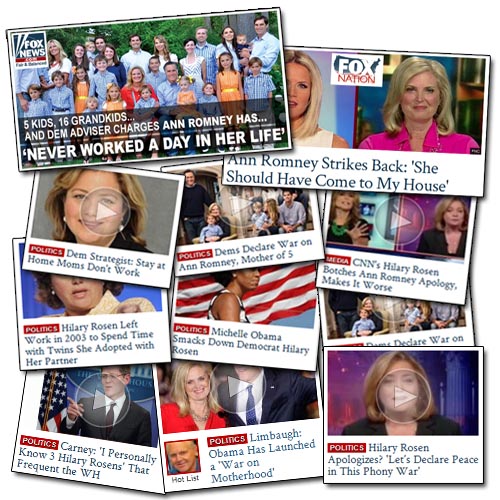 Fox News, the Republican PR Agency, has launched a full-blown campaign to help dig Mitt Romney out the hole he has dug for himself with his anti-woman rhetoric and policies. The 19 point deficit Romney suffers in polling for women’s votes was seen properly as an electoral red flag and the flacks at Fox jumped in to rescue the floundering candidate.

Much of the criticism has expanded from jabs at Rosen to swings at President Obama. Never mind that Rosen is not attached to the President or the campaign in any capacity, and those who are have repudiated her remarks.

Jim Messina, Obama campaign manager: I could not disagree with Hilary Rosen any more strongly. Her comments were wrong and family should be off limits. She should apologize.

What’s more, Rosen herself has apologized:

“I know my words on CNN last night were poorly chosen. In response to Mitt Romney on the campaign trail referring to his wife as a better person to answer questions about women than he is, I was discussing his poor record on the plight of women’s financial struggles. […] I apologize to Ann Romney and anyone else who was offended. Let’s declare peace in this phony war and go back to focus on the substance.”

None of that has prevented Fox News from slathering their unique brand of propaganda and hyperbole over this affair in an effort to keep it bubbling up in the news cycle. Megyn Kelly spent a good portion of her program on this issue alone, interviewing several guests including former First Lady Barbara Bush (In a moment of ironic overflow, Kelly raised the issue of women who were fortunate not to have had to struggle financially, to which Mrs. Bush said “It wasn’t always that way for us.” Remember, this is the wife of the wealthy son of an oil baron and former president. Nah, they aren’t out of touch at all, are they?).

Also on Fox, they brought in their resident “Psycho” Analyst, Keith Ablow, who opined that “Hilary Rosen provided a clear psychological window on women who despise other women.” That’s the patented Ablow remote diagnosis of people he’s never met. He then projected this flaw onto Obama, who had nothing to do with any of this.

The whole point of this manufactured controversy is to lay into Obama for having the temerity to be popular with America’s women voters. And if they have to lie and distort reality to pull him down, well, that’s why Fox News exists in the first place.