When a courageous speaker of truth emerges from the forest of lies that is modern media, the risk is ever present that censorship, suppression, or worse could occur. Sadly, that is the case today. Glenn Beck produced an episode of his program that continued his valiant search for communists burrowing into the woodwork of America like subversive termites eating away at the foundation of our national home. However, this episode has mysteriously disappeared. Fortunately, I have acquired a transcript (h/t Esquire) of the “Lost Episode” that reveals perhaps the most insidious enemy of freedom yet unveiled by Beck. 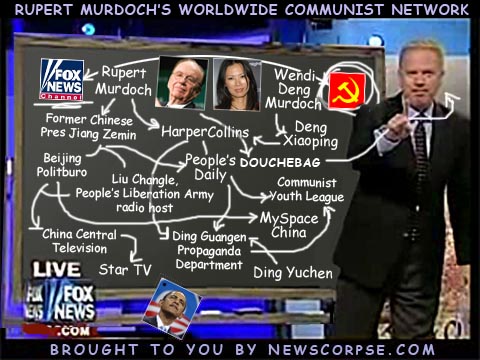 GLENN BECK: THE RUPERT CONNECTION [Transcript]
[Editor: Everything below regarding Murdoch and China is true]

GLENN BECK: My viewers know that I am not the sort of guy who resorts to sensationalism and hyperbole, but today’s show is going to cause blood to shoot out of your eyes. You will totally freak out and very likely wet your pants, as I did when I found this out. In short, there are forces in the media who are directing the course of our nation’s future, and it’s not who you think it is.

If you think this country is great, but ogres are hiding under the bed waiting to defile you while you sleep, then wake up – and come on, follow me.

Hello America. I am going to ask you to pay special attention to today’s program because this is going to get complicated. Keep a pencil and notepad handy. You will want to take notes.

On previous shows I’ve warned you about the extreme radicals and avowed communists that are holding important positions in our government. I’ve warned you about conspiracies like ACORN and the National Endowment for the Arts. I’ve exposed Van Jones and Mark Lloyd and Valerie Jarrett. I know, the liberal elite are going to complain that I only go after black folks. “Oh, he’s a racist. He doesn’t like the darkies.” But that isn’t true. I also exposed the safe schools czar, Kevin Jennings, and he is a white fag…I mean gay. The point is that radicals are taking root at every level of government. People who hate the principles we devout Christians hold dear.

But today’s program is about more than just the government. Oh yes, it touches every part of the government but it has maybe even more power in this country and around the world. It’s the media.

When I talked earlier this year about how we, the patriots and truthtellers, are actually surrounding all of the weasels and the traitors, I meant every word. Barack Hussein Obama’s czars have been dispatched to every corner of Washington’s power grid. But in the case of the media, it really is surrounding us. It’s everywhere. In our homes, our cars, our offices, our fast food restaurants. It is being fed into us intravenously. We are all being indoctrinated 24 hours a day, seven days a week. I don’t want to scare you, but I’m speaking to you right now on the media. Sure, the liberal pansies will cry “But aren’t you a big, rich, media star, with all your TV and radio and books?” And I shout right back at them “Well maybe I am, but you’re forgetting that I rarely make any sense and besides, shut your friggin pie hole!”

I want to tell you all something that I just recently learned from the guy who delivers my pizza. He stumbled on an article in that bastion of progressive propaganda, the New York Times, that was hidden under a pile of Hefty bags in the alley behind his shop. Now how did it get there? Hmmm? A copy of a major American newspaper, rolled up and stuffed in the trash? What are they trying to hide? Quite a lot, as you’ll soon see.

Now, it is not commonly known that the biggest media mogul in the world is a fellow named Rupert Murdoch. He runs more TV and newspaper businesses throughout the world than anyone, but still complains about the bias in the mainstream press. I mean, duh. Who does he think he is, the Pennysaver? He’s Australian by birth, but he went to live in socialist Europe, and later came to the United States. When he wanted to buy an American TV network, he got his socialist friends in the Congress to make him a U.S. citizen, which was a prerequisite for owning a network. After receiving that special treatment, he made sure to bash any other immigrants who aspired to live and work the greatest country in the world.

Then he began to build what is the most frightening corporate empire you can ever imagine. Now, the problem isn’t just that it’s big, because I happen to love big business and free enterprise. The problem is who he is in business with.

This Murdoch is very tightly entwined with one of America’s most vicious enemies. The People’s Republic of China. This association begins in his own family. His third wife, Wendi Deng, is a mainland Chinese who once worked for his Hong Kong-based satellite broadcast company, Star TV. Star TV was run by James Murdoch, Rupert’s son. Um, OK. James is the guy who complained that western reporters in China supported “destabilizing forces” that are “very, very dangerous for the Chinese government.” So let me get this straight. He was defending the communists against reporters from America? OK.

Under the supervision of Rupert and James, Star TV bent its programming to favor the brutal Chinese regime. In 1994 it dropped BBC News, which had frequently angered Chinese officials. One of the reports that angered the Chinese was of the brave soul who famously stood up to a flank of Chinese tanks in Tiananmen Square. The BBC replayed that video too much, so Murdoch had the network banished.

By cooperating with the communist censors in China, Murdoch earned the friendship of some very important people. The article in the Times noted that…

“His courtship has made him the Chinese leadership’s favorite foreign media baron. He has dined with former President Jiang Zemin in the Zhongnanhai leadership compound in Beijing and repeatedly met other members of the ruling Politburo in Beijing, New York and London. Television channels affiliated with Mr. Murdoch beam more programming into China than any other foreign media group.”

Uh oh. So this relationship was a boon to his financial interests. Do you think that the $50 billion ad market in China had anything to do with that? I don’t know, I’m just asking. But Murdoch was awfully cozy with these guys. His book publishing division, HarperCollins, was kind enough to put out a book of fawning propaganda about the former leader, Deng Xiaoping, that was written by his daughter, Deng Rong. He also halted publication of a book by former Hong Kong governor Chris Patten that was critical of the Chinese. Hmmm. Propaganda good – criticism bad.

In 1996, Murdoch entered a joint venture with Liu Changle, a onetime radio host for the People’s Liberation Army. And you know those radio hosts. They aren’t nothin but a bunch of ignorant, egotistical, blowhards trying to spread disinformation. This new partnership led to an even closer association with China’s propaganda machine. Murdoch was now hanging out with Propaganda Department chief, Ding Guangen, and then Prime Minister, Zhu Rongji. Another partner was the Central Committee of the Communist Youth League, considered the political power base of China’s new top leader, Hu Jintao. He parlayed these relationships into a new business, building the Internet sites for China Central Television (CCTV) and the People’s Daily, the mouthpiece of the Communist Party.

Murdoch later was permitted to launch MySpace China. He agreed to all of China’s regulations on Internet censorship and placed a convenient link on every page for users to report inappropriate information to the authorities. How thoughtful of him. I wonder how many Chinese dissidents disappeared due that little feature?

If you are not already rolled up in the fetal position under a table, I don’t know what to tell you. This is serious stuff, and it is one of the reasons I have never feared more for the future of my country. When the biggest media conglomerate in the world is in bed with the world’s biggest communist nation, how much longer can we expect to remain free? And remember, China has us by the short hairs due to all of the U.S. debt they hold.

America…It is more important now than ever to be vigilant and strong. I don’t know how much longer I will be allowed to say these things in public. I told you before that certain entities were threatening to silence anyone who speaks truthfully. I told you to listen between the sentences where I will be screaming at you. I told you to be suspicious of any reports of my demise. Do you think I want to get on the air every night and tell you this stuff? I don’t want to believe these things, but unfortunately I find them true. It’s not my damn fault. Get off my fucking back. And stop following me around. I mean, come on, follow me. Believe me. Love me. Worship me. I’m doing all of this for you. Can’t you see that?

America is at a crossroads. Which way will we go? Further to the left, where communism, tyranny, aliens, and universal health care torment every citizen? Or back to the right, where unregulated free enterprise allows clowns like me to make millions by peddling fear and phony conspiracies? Do you want to repeat the Age of Enlightenment, when society was burdened with reason and the harshness of reality. Or would you prefer the glorious Dark Ages when people relied on faith and the comforting fear of a just and vengeful God?

I know which road I’m taking. I hope to see you on it. Good night, America.

That’s the end of the transcript. The Murdoch/China connection is pretty well blown wide open now, thanks to Glenn Beck. The question is, will this episode ever see the light of day? And now that the transcript is out, will Beck be punished for his insolence? Is Murdoch already laying the groundwork for Beck’s downfall? What exactly is the connection between Murdoch and Color of Change, who have been orchestrating a surprisingly successful campaign aimed at Beck’s advertisers? About 80 advertisers have already declared that they will not purchase time on Beck’s program Could that have been accomplished without Murdoch’s knowledge and assistance?