The fallout from Donald Trump’s reckless and paranoid accusations that President Obama had wiretapped him continues to spread like wildfire. Ever since he tweeted these delusions, criticism has poured out from across the political spectrum. Voices as diverse as Republican senator Ben Sasse and Democratic leader Nancy Pelosi have called for investigations of these charges. One intelligence expert speculates that Trump is “getting buggy because he knows that he’s caught.” 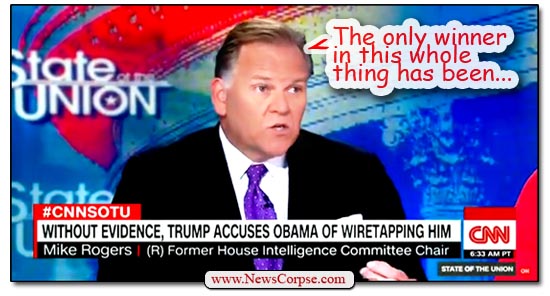 Sunday morning on CNN’s State of the Union a panel discussed the wiretap allegations with near universal disapproval. Most notable were the remarks of Mike Rogers (video below). Rogers is a Republican who chaired the House Intelligence Committee. Prior to his congressional service he was a special agent for the FBI and Army veteran. His experience and conservative credentials are unimpeachable. Which makes his comments on the wiretapping controversy particularly significant. When asked what might have motivated Trump to post his accusatory tweets, Rogers replied:

“I don’t understand why he did this. They just put another quarter in the conspiracy parking meter. They’ve extended this story for a week, two weeks? Makes no sense to me whatsoever.

“Two things. One: This should have been held, if he had that belief, and if he believed there had been some inappropriate behavior on behalf of the Justice Department doing this, then there are internal investigative mechanisms he should have used and called for. Making this a big public fight like this, I just think is wrong.”

Indeed. It is wrong both legally and politically. As knowledgeable people in the field have affirmed, it is not even within the powers of the president to do what Trump charged. Only a law enforcement entity can request a surveillance warrant, and even they would need approval from the FISA court. But what Rogers said next should send shockwaves through Trump’s White House and the Republican Party:

“As a matter of fact, the only winner in this whole thing has been Vladimir Putin. I mean, the Democrats are saying that he stole an election. And the President of the United States is saying ‘Don’t worry about it. He’s a pretty good guy.’ If I were Vladimir Putin I’d be feeling pretty good right about now.”

No kidding. Putin has managed to tamper with the electoral process of his biggest international rival. He has elevated his hand-picked candidate to the presidency of the United States. Now his pawn in Washington is implementing policies that Russia has long dreamed of. These include weakening the European Union, threatening the stability of NATO, and inserting wedges that separate America from allies such as Australia, Germany, and Japan.

And all the while, Trump continues to praise Putin. Trump has criticized Meryl Streep and Nordtrom’s more than Russia. But Streep and other Trump targets have not invaded Ukraine or murdered political rivals. At least that we know of. Perhaps disclosure of those atrocities are forthcoming in Trump’s future tweets.