Yesterday the Wall Street Journal somehow managed to snag an exclusive interview with Rupert Murdoch who, coincidentally, owns the newspaper.

Murdoch was typically defensive in a wholly delusional manner. He insisted that News Corp had handled the crisis “extremely well in every way possible,” making just “minor mistakes.” Minor mistakes like lying as to whether there was any crisis at all and conducting an internal investigation that concluded that any wrongdoing was limited to a single rogue reporter. The shuttering of the News of the World, the abandonment of the BSkyB acquisition, and several arrests later, those mistakes don’t appear to be all that minor anymore.

Murdoch also stuck by his corrupt son whom he said reacted “as fast as he could, the moment he could.” That was six years after the scandal broke and after young James had paid off several victims in an attempt to buy their silence.

This morning comes the news that the CEO of Murdoch’s News International, Rebekah Brooks, has resigned after steadfastly refusing to do so with the support of her boss, Rupert, who just days ago said that Brooks was his highest priority. So much for that. Brooks’ resignation statement said in part…

“As Chief Executive of the company, I feel a deep sense of responsibility for the people we have hurt and I want to reiterate how sorry I am for what we now know to have taken place.”

The problem for Brooks is that if she did not know what had taken place before this she is utterly incompetent. And, of course, if she did know, she is guilty of despicable and criminal behavior. It’s interesting that News Corp’s second largest shareholder, Prince al-Waleed bin Talal al Saud, told BBC’s Newsnight that she should resign if her involvement in the phone hacking scandal was “explicit”. Hours later she resigns. And remember, it was Brooks who warned that the next year would bring more trouble:

“We have more visibility perhaps with what we can see coming our way than you guys can. I am tied by the criminal investigation but I think in a year’s time, every single one of you in this room might come up and say ‘OK, well, I see what she saw now.'”

She’s right. In all likelihood there are still more revelations to come. The severity of the reactions to date suggest that all we have seen thus far is the tip of the iceberg. Murdoch, a notorious brawler, would not passively close a profitable, 168 year old newspaper, ditch the biggest business acquisition he has ever attempted, throw his trusted lieutenant under the lorry, and acquiesce to an inquisition by members of Parliament, if there weren’t something dreadful that he was trying to keep clamped down. His announcement that he will convene an “independent committee” to conduct his own inquiry is laughable, especially considering that he was forced to assign an unnamed “distinguished non-employee” to lead the effort. Presumably there no distinguished employees to call upon.

There are now a half dozen American lawmakers calling for various investigations from Congress, the Department of Justice, and/or the FBI (which has reportedly already opened an investigation). There have been at least seven arrests. The possibility of this affair crossing the Atlantic and involving allegations of the hacking 9/11 victims is the subject of much speculation. Fox News and its master, Roger Ailes, are not immune to this calamity. And if it goes there Rupert can kiss his evil empire goodbye.

Les Hinton, the chief executive of Dow Jones & Co., has resigned, becoming the latest News Corp. executive casualty in the phone-hacking and bribery scandal in Britain.

Hinton served as executive chairman of the British unit that oversaw News Corp.’s U.K. tabloid newspapers at the heart of the scandal for 12 years. A member of the board of The Associated Press, Hinton became head of Dow Jones in December 2007.

Hinton said in a statement that he was “ignorant of what apparently happened” but felt it was proper to resign.

The classic defense of scoundrels: Ignorance and/or victimhood. As the chief executive of Dow Jones, Hinton was responsible for the Wall Street Journal as well. And while he ran Rupert Murdoch’s British newspapers for 12 years, he worked for Murdoch for 52 years, beginning the association in Australia at age fifteen. With Hinton leaving, and Murdoch’s honorary daughter Rebekah Brooks gone as well, Murdoch is shedding his closest and most trusted allies. Can Roger Ailes be far behind?

This is looking more and more like some horrific news has still yet to bubble up from the Murdochian Hades. I’m beginning to wonder if there are bodies stashed somewhere.

Anyone waiting for the next shoe to drop in the News Corp hacking affair would be wise to seek cover. It’s about to hail footwear. No matter how hard Rupert Murdoch and his minions struggle to hold back the sea, they are continuing to get battered by higher and more powerful waves of corruption. And the tsunami is reaching across the Atlantic to American shores. 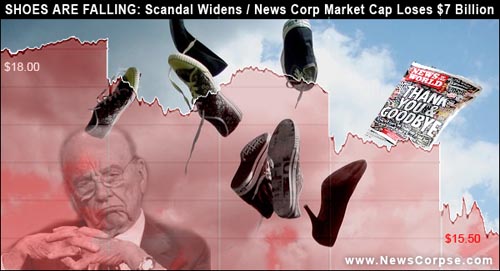 Here are a few of the late breaking stories that threaten to being down many of News Corp’s highest ranking officers:

“…a former New York cop made the 9/11 hacking claim. He alleged he was contacted by News of the World journalists who said they would pay him to retrieve the private phone records of the dead.”

Congress encouraged to investigate News Corp in the U.S.

“The watchdog group Citizens For Responsibility and Ethics in Washington is calling on Congress to investigate Rupert Murdoch’s News Corp. for evidence that the company’s sprawling phone hacking scandal reached the United States.”

[Note: Media Matters has a petition calling on Congress to investigate News Corp. That’s only fair since Fox News has initiated a campaign against Media Matters.]

“British media said Monday that Brown was one of thousands whose personal details — including his bank account and his son’s medical records — were targeted by people working for News International titles including the Sun and the Sunday Times.”

“A group of News Corp. shareholders have sued the company over a phone-hacking scandal at its now-closed News of the World tabloid in London. The lawsuit accuses News Corp. of large-scale governance failures.”

The scandal is reaching into the executive suites of Rupert Murdoch, who may lose his bid for the BSkyB satellite business. Even worse, he may be liable for prosecution under the Foreign Corrupt Practices Act. Murdoch’s man at Dow Jones (parent of the Wall Street Journal), Les Hinton, has been implicated in a cover up. Even conservative British Prime Minister David Cameron called Hinton out saying…

That 2006 investigation was overseen by Hinton who concluded that only one NotW reporter had done anything wrong. Clearly that was untrue. We now know that more than 4,000 people were victims of the hackers. Either Hinton was utterly incompetent or he was deliberately complicit in the cover up. And while Hinton was running Murdoch’s British papers, Rebekah Brooks was the editor of NotW. Brooks was briefly in charge of conducting the most recent inquiry into the scandal, but she has been removed as more speculation arises as to her involvement.

As an illustration of the depraved nature of these weasels, BBC’s Newsnight hosted actor/comedian Steve Coogan who confronted the former deputy features editor of NotW, Paul McMullan. Coogan told McMullan that he was morally bankrupt after McMullan explicitly defended the unlawful practice of hacking into people’s cell phones:

McMullan: I’ve always said that I try to write articles in a truthful way, and what better source of getting the truth is to listen to someone’s messages?

McMullan could also get the truth by breaking into people’s homes and hiding in their closets. He went on to make the ludicrous claim that freedom of the press would be at risk if he were prohibited from invading the privacy of anyone with a phone. And he mocked Coogan for profiting from his celebrity while complaining about having his phone hacked.

Today Rupert Murdoch withdrew his offer to spin off Sky News as a condition to win approval of his acquisition of BSkyB. That condition was key to the bid going forward due to concerns that he would control too much of the British media. By withdrawing the offer he casts the bid back into the Competition Commission for a review that will likely take six months. Murdoch’s purpose is to delay the decision in hopes that the hacking scandal would fade away. But there is now the risk that the Commission will decline approval for the acquisition. This move shows both how cynical and how desperate Murdoch is.

Stay tuned. This thing is getting worse by the hour. And don’t expect to see much about it on Fox News. Roger Ailes must be running scared himself. I wonder why.