For all of his rancid bluster during the campaign, Donald Trump has proven to be one of the laziest presidents in modern times. Trump demeaned Hillary Clinton as lacking stamina, but on his recent nine day trip overseas he was tuckered out after the second day. And the absence of any signs of productivity are dreadfully – and dangerously – apparent. 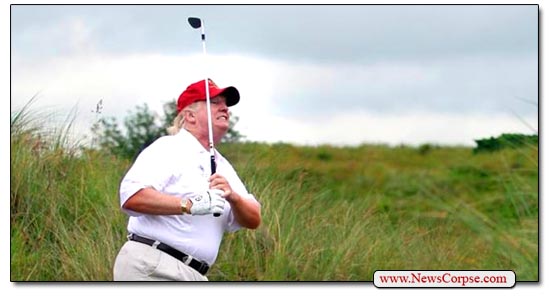 Trump spent Monday morning consumed by one of his favorite pastimes: bloviating on Twitter. But he wasn’t content with insulting our British allies and admitting his executive order on immigration was a ban. He also had to lash out at Democrats in Congress for not confirming his diplomatic nominees:

.@foxandfriends Dems are taking forever to approve my people, including Ambassadors. They are nothing but OBSTRUCTIONISTS! Want approvals.

There is so much wrong with that tweet that it’s hard to know where to begin. First of all, Democrats aren’t obstructing anything. In fact, they can’t. Ambassadors can be confirmed with fifty-one votes, so Republicans don’t need any Democrats. And it’s the GOP that is in control of the Senate calendar. They can schedule hearings and votes whenever they want.

However, the main problem is that Trump isn’t submitting nominees for confirmation. Of 559 key positions needing confirmation, thirty-nine have received it and seventy-eight are pending. But there are 442 posts for which Trump has not put forth a nominee at all. So obviously it’s the Democrats’ fault. And what does Fox and Friends have to do with any of this? Is that just a free ad?

At the beginning of his term, Trump created a boatload of unnecessary vacancies. He summarily dismissed ambassadors and U.S. Attorneys held over from the Obama administration. Even if they were career bureaucrats unaffiliated with party politics. He also fired James Comey, the FBI director and still has not named a replacement. Candidates from across government and the Pentagon are rejecting offers to serve this president. They are either repulsed by his insistence on a loyalty oath, or they are afraid of ruining their careers and reputations by being associated with him.

Given the difficulty he’s facing in assembling his administration, you might think he’d dedicate himself to fulfilling his duties. To the contrary, when he isn’t consumed with Twitter tirades he’s on the golf course. His two dozen golfing excursions in only a dozen weeks have surpassed any of his predecessors. And that’s despite his campaign promise that, if elected “I’m going to be working for you, I’m not going to have time to go play golf.”

It’s that sort of hypocrisy that defines the Trump presidency. But more troubling is that he has demonstrated an aversion to doing any of the hard work required to run the country. And in these volatile times that can expose the U.S. – and the world – to unnecessary peril. Which, of course, he would blame on someone else.