The constant stream of falsehoods that emanate from Donald Trump has made no sign of slowing down. This weekend Trump, who has not had a TV interview in over a month, gave two to Fox News. And not surprisingly, he provided some new nuggets of dishonesty to the pile he has amassed since becoming president. 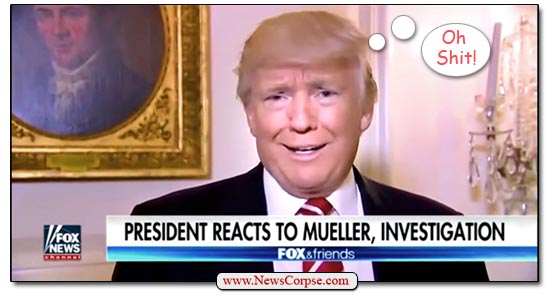 In an interview with Ainsley Earhardt of Fox and Friends, the Fox News host unleashed a barrage of brutal softballs at the President. She prefaced her inquiries with flattering language about how smart he was for pretending to have tapes of himself and James Comey (which is potentially unlawful witness tampering). And she comforted him with partisan assertions that “Democrats are in denial.” But Earhardt laid it on extra thick when the issue of Trump’s collusion with Russia came up:

Could Earhardt have composed a more fawning, servile, obsequious question? She must be so doubtful that he could come up with a coherent response, she provided one for him. Trump eagerly embraced the leading question and blindly agreed that Mueller is “very, very good friends with Comey.” Then he whined that “there has been no collusion, no obstruction, and virtually everybody agrees to that.” Everybody? Well, that’s if you don’t count dozens of legal experts, intelligence professionals, and investigators currently researching the matter. But then he went even further over the edge:

“I can say that the people that have been hired are all Hillary Clinton supporters, some of them worked for Hillary Clinton. I mean the whole thing is ridiculous, if you wanna know the truth.”

Indeed, it is ridiculous. But not in the way Trump thinks. PolitiFact reviewed his remarks and found them top be “Mostly False.” As it turns out, only three of the eight attorneys hired by Mueller were Clinton supporters. And any associations that any of them had were incidental and fully permissible under the “Rules of Professional Responsibility.” That assessment, by the way, came from Peter Carr, a spokesperson for Jeff Seesion’s Justice Department. And it was consistent with the summary ruling by PolitiFact:

“Three of the eight available Mueller hires made campaign contributions to Clinton, which undermines Trump’s statement that all are Clinton supporters. Furthermore, none of them have worked for Clinton directly. Two represented either the Clinton Foundation or an aide, never her, and working for WilmerHale, which has also represented key members of Trump’s White House.”

So Trump’s allegations (and that of many of his media surrogates) that the investigation is biased politically and motivated against him, is a bald-faced lie. If only that were an isolated incident in this presidency. Unfortunately it is the rule, rather than the exception. And anyone who takes Trump at his word is shamelessly begging to be made a fool of and deliberately deceived.

Monday morning the Supreme Court announced that they will allow a temporary ban on Muslims entering the United States to go into effect. The ban was part of an Executive Order by Donald Trump that was blocked by lower courts, rewritten, and blocked again. In the Supreme Court’s decision the ban will be partially reinstated until the the full court considers it in October.

For the record, the Court did not side with Trump on the constitutionality of the ban. They only reversed the lower court decision to suspend the Order pending a final ruling. But there is a more important reason why the whole matter is absurd. In order to understand what’s wrong with this decision we need to look at what the Order originally called for. Which was this:

“I hereby suspend entry into the United States, as immigrants and nonimmigrants, of such persons for 90 days from the date of this order. […] The Secretary of State shall suspend the U.S. Refugee Admissions Program (USRAP) for 120 days.”

Trump’s attempts to ban immigrants and refugees were limited in scope to 90 and 120 days respectively. That ban was was ordered on January 27, 2017. So it is has already been 150 days since the order was effective. His reason for imposing the ban was to review the processes and procedures related to immigration and the security considerations thereof. There was nothing stopping him from conducting that review for the past 150 days. Had he done so it would have been completed by now and the ban would be moot.

Why didn’t Trump conduct those reviews that he was so insistent were critical to national security? Why isn’t he conducting them now? If he really cared about the safety of the American people he would have done that while the courts were hashing out the Executive Order. This exposes the lie in his statement celebrating the Supreme Court’s temporary ruling. He said that “My number one responsibility as Commander-in-Chief is to keep the American people safe.” Obviously that wasn’t true. Because instead of fulfilling that responsibility, he did nothing at all. And that is pretty much the story for his entire short presidency.