Donald Trump is reportedly holed up at Camp David this weekend. It’s the first time that he’s visited the official presidential retreat since taking office. He prefers to stay at his own luxury golf resorts where taxpayers have to shell out for his lodging. Taxpayers also foot the bill for the dozens of staff and security personnel who accompany him. 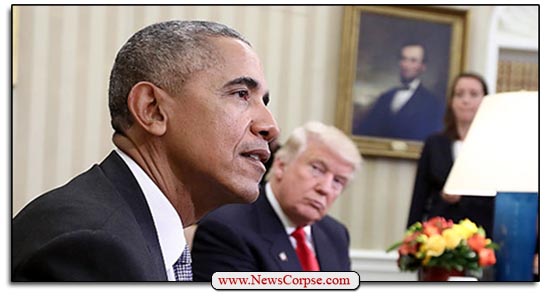 But while at Camp David, Trump still found time for exalting himself on Twitter. He boasted about how well his agenda is doing, despite a record of profound failure. All of his most prominent campaign promises have gone unfulfilled. He has been unable to repeal ObamaCare. There is no hint of a wall along the southern border. Tax reform hasn’t even begun. Terrorism is just as big a problem as ever. His attempts to implement a ban on immigration were repeatedly struck down by federal courts.

The most peculiar tweet of this Sunday morning TwitFit is one that sought to pump up his ego. Yeah, I know that applies to most of his tweets. But this one was more flagrant than most:

First of all, no one regards Rasmussen as an especially reliable survey outfit. They are brazenly biased toward Republicans and conservatives. And their accuracy lies closer to the bottom of the pack. What success they have is only because they often rejigger their findings at the end of a campaign to be more in line with other polls. That improves their averages, but is wholly dishonest. FiveThirtyEight gives them only a C+ rating. Their survey method employs automated phone calls to landlines. Most polling services regard operator-assisted calls as more reliable. And capturing the opinions of cell phone users is a requirement for accurate results.

That said, Trump’s assertion that his fifty percent approval rating is higher than President Obama’s is just plain false. According to Rasmussen’s website, Obama had an approval rating of fifty-five percent at this point in his presidency. During his first five months, Obama got as high as sixty-three percent, and never dropped below fifty-three. Trump, on the other hand, has marked record lows for a president in his first five months. This new personal high of fifty percent comes after an unlikely and unexplained seven point leap in two days.

Let’s set aside for the moment the fact that Trump outright lied about beating Obama’s numbers. And also the fact that Rasmussen is overtly biased. The spectacle of Trump getting excited about an approval rating that leaves half the country dissatisfied is kind of pathetic. What’s more, Rasmussen breaks down his numbers to reveal that only thirty-one percent “strongly approve” of Trump while forty-two percent “strongly disapprove” (a net negative index of -11%). Yet this is something that Trump thinks is cause for celebration. That’s the sign of a desperate and delusional man.

Donald Trump and his administration are not known for their ability to communicate a consistent, coherent message. They have a history of wildly contradictory statements and absurd deflections from reality. So it isn’t surprising that Trump’s new lawyer, Jay Sekulow, has continued that tradition. He made several appearances on the Sunday morning news shows that did nothing but contribute to the confusion surrounding the investigation into Trump’s obstruction of justice. 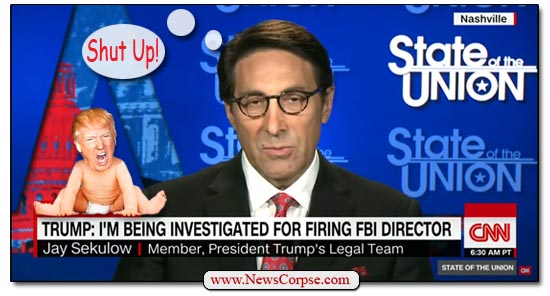 On all of these programs the discussion was related to a story in the Washington Post saying Trump is under investigation. The Post reported that on the basis of five (count ’em, five) sources who requested anonymity. Of course, Trump has previously railed against the use of anonymous sources despite using them himself when it suits him. However, professional journalists have relied on such sources with great accuracy for as long as there has been journalism.

That’s simple enough. The President is explicitly agreeing with the Post that he is being investigated. And the investigation concerns, in part, the events leading to the termination of former FBI Director, James Comey. He’s also blaming it on someone at the Justice Department who told him to do it. Never mind that he told NBC’s Lester Holt it was his decision alone. A decision that he made before consulting the DOJ. The bottom line is that everyone is on the same page with regard to the existence of an investigation. Right?

Wrong. Mr. Sekulow, Trump’s attorney, objects. On each of his Sunday interviews he blatantly contradicted his client. He repeated that the President is not now, nor has he ever been, under investigation. But his attempts to support that argument were ludicrous. Let’s begin with the most friendly forum for Trump’s representative, Fox News. Chris Wallace noted that Sekulow himself said that Trump is being investigated.

Wallace deserves some credit for not letting Sekulow get away with contradicting both himself and Trump. But Sekulow’s attempt at crystal clarity just dodges the substance of his own prior remarks. So let’s move on to Meet the Press with Chuck Todd:

Sekulow’s reply doesn’t begin to answer the question. In fact, it makes no sense. How does Trump’s alleged response being aimed at the Post’s story change the meaning of it? That question comes up again when Sekulow appears on CNN’s State of the Nation with Jake Tapper (video below):

Now Sekulow is asserting that the Post’s story is fake. Of course, he doesn’t provide any evidence to substantiate that allegation. As a lawyer he should know better. But even that reckless remark doesn’t explain why Trump said that he is being investigated. Sekulow tried to bolster his defense by asserting that Twitter’s character limit is what prevented Trump from being clear. But Trump’s tweet contained only 111 characters. So he had twenty-nine to spare. And according to Sekulow, “the President has very effective utilization of social media.” So he could easily have added “WaPo Says,” or even “the fake news WaPo says.” So there was no impediment by Twitter on Trump making an accurate statement.

At this point it should be noted that Sekulow is not telling the truth about whether Trump is under investigation. All he can say honestly is that he isn’t aware of any investigation. He cannot say that there isn’t one. Wallace called him that and he agreed. Nevertheless, he repeated the same falsehood on the other programs. It’s a propaganda tactic aimed at convincing people that Trump is pure as the driven snow. But his execution is so inept that he just winds up muddying the waters and making his client look guilty. Which I suppose is a professional hazard for lawyers with guilty clients.