Last month Donald Trump took to Twitter to post one of his most coherent messages to date. It was a brief tweet that said only “Despite the negative press covfefe” (it was later deleted). Yep, that’s it. And with that he communicated with his devoted disciples who all seemed to know exactly what he was talking about. His press secretary, Sean Spicer, said that the meaning was known “to the President and a small group of people.” Spicer declined to reveal the meaning or the people who knew it. 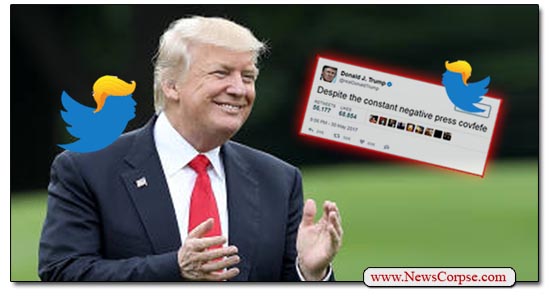 Now we have some added clarity of the issue thanks to a Mike Quigley, a congressman from Illinois. The Democratic representative just introduced a new bill that directly addresses the covfefe controversy. Creatively named “The Communications Over Various Feeds Electronically for Engagement” (aka the COVFEFE Act), it doesn’t exactly provide a definition. But it does give guidance on handling Trump’s Twitter blathering. According to Quigley’s House web page:

“In order to maintain public trust in government, elected officials must answer for what they do and say; this includes 140-character tweets,” said Rep. Quigley. “President Trump’s frequent, unfiltered use of his personal Twitter account as a means of official communication is unprecedented. If the President is going to take to social media to make sudden public policy proclamations, we must ensure that these statements are documented and preserved for future reference. Tweets are powerful, and the President must be held accountable for every post.”

Administration staffers like Kellyanne Conway and Sebastian Gorka have contributed to the ambiguity regarding social media. They have both told reporters to dismiss Trump’s tweets as casual asides. However, those views were directly contradicted by others in the administration. Rep. Quigley notes that “Trump’s tweets frequently make national news and are a topic of everyday conversation.” When asked about Trump’s tweets Sean Spicer admitted that they are “considered official statements by the president of the United States.” Even the President has made clear that he considers his social media commentaries to be indispensable methods of communicating with the public:

The FAKE MSM is working so hard trying to get me not to use Social Media. They hate that I can get the honest and unfiltered message out.

This is why the COVFEFE Act is necessary to quell the confusion. And, for the record, no one in the media wants Trump to stop tweeting. For them it is a goldmine of insight into his thoughts and motivations. It’s only his staff who think he should quit.

The COVFEFE Act isn’t the first brilliantly designed legislative acronym of the Trump Era. We previously saw the introduction of the “No Taxpayer Revenue Used to Monetize the Presidency’ Act” (aka the No TRUMP Act).” It proposed to prohibit presidents from profiting off of official visits to properties they own. Then there was the “Making Access Records Available to Lead American Government Openness Act” (aka Mar-A-Lago Act). It’s purpose was to make visitor logs publicly available, whether at the White House or any other place where official business was being conducted.

Despite the obvious humor, all of these bills have serious goals. They generally address the transparency of the President’s affairs. The public’s right to know is an indispensable component of a healthy democracy. Trump has been unusually secretive in his dealings. He continues to refuse to release his tax returns, and he is now making enigmatic references to covert recordings. These bills are a small step toward holding him, and any future president, accountable.