Trump delivered another tedious and repetitive stump speech at one of his, now frequent, cult rallies Wednesday in Erie, Pennsylvania. It was a showcase for all of his “greatest hits” featuring “Build the Wall,” “Lock Her Up,” “Witch Hunt,” and many more. However, there was difference with this revival meeting that sets it apart from most of those in the past. 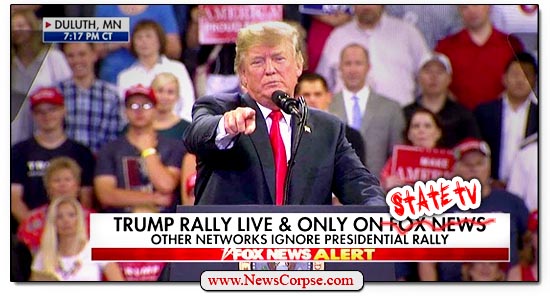 Politico reports that the Trump Broadcasting Network’s State TV (aka Fox News), declined to air the event live and uninterrupted as they usually do. Fox News has been a devoted servant of this administration when it comes to disseminating propaganda via their airwaves. They even promote on air with chyrons that read “Trump Rally Live & Only on Fox News, Other Networks Ignore Presidential Rally.” But it’s possible that Trump’s floundering popularity and financial concerns may be influencing their programming going forward. Politico notes that:

“As he’s ramped up his rally schedule ahead of the midterms, viewership numbers for the raucous prime-time events have been roughly similar to — sometimes dipping below — Fox News’ regular programming, and the network has recently stopped airing most evening events in full.”

That’s right. Trump is losing fans on the network that has been his official fan club for more than two years. This cannot be good news for the President, especially since he is increasing the number of these affairs specifically to boost the campaign prospects of Republican candidates in the cities where he is performing.

Consequently, Trump is compensating for this reduced coverage by calling into Fox News programs by phone. In the past three days he’s done that three times, ringing up his buddies Jeanine Pirro, Shannon Bream, and the “Curvy Couch” potatoes of Fox and Friends. But this is not likely to satisfy the White House. They have grown accustomed to the fawning attention they get from Fox News and expect it to continue. And they aren’t sitting around waiting for Fox to correct the situation. According to Politico:

“One senior White House official was unsure why the network would decide to cut away from presidential rallies, saying officials planned ‘to look into that’ and wouldn’t be surprised if White House communications director Bill Shine, a former Fox News executive, was in touch with former colleagues about the trend.”

Let that sink in. The White House believes that they have some sort of right to free airtime on Fox News, and if they aren’t getting it they will take action to set the network straight. Notice that they aren’t talking about looking into CNN or MSNBC. They are focusing on their wholly owned platform for media exposure and dispatching Bill Shine to address this outrageous policy shift. Shine is the former president of Fox News and Trump’s current deputy chief of staff for communications. And if you think that this isn’t explicitly about having an impact on the upcoming midterm election, just take it from the mouth of a GOP campaign operative who worries about the loss of Trump’s TV time because:

“‘It exposes us to a national audience that we normally don’t get to,’ a Senate Republican campaign staffer said of the coverage of Trump rallies. ‘We tend to see lots of new sign-ups and small-dollar donations. There’s obviously folks streaming [rallies] online, but being able to be onstage with the president in front of a prime-time audience is huge for a campaign trying to reach conservatives across the country who will open up their wallets.'”

Among the other observations made by Politico are that Trump’s rallies are drawing fewer viewers. “His events at times popped for more than 4 million viewers on Fox News,” a source said. Which is “a number he hasn’t come close to in 2018.” What’s more, “network officials’ fear was that too much repetition would lead to lower ratings,” and that Fox News could lose millions of dollars in ad revenue because they “can’t take commercial breaks while Trump is speaking.”

Perhaps the decision to cut back on live rally airings led to Trump making a blatant promotional pitch for Fox in order to get more airtime via flattery. He gave a shout out on Wednesday to Foxies who he praised for maligning Democrats as “the Dimms,” saying:

“The great Lou Dobbs, he says that, right? Sean Hannity says that. ‘The Dimms.’ Judge Jeanine says that, doesn’t she? Laura [Ingraham]. Laura. How good has Laura been, right? Do we like Tucker? I like Tucker.”

Actually, only Lou Dobbs says that, but getting the facts straight has never been of much concern to Trump. All he wants is to have his face in front of the Deplorables who are glued to Fox News all day and night. He wants to make sure his perverse and incoherent message is being injected into the already acutely ill-informed brains of Fox’s loyal audience. And if Fox News thinks they can get away with reducing his airtime, they better be prepared for more of this:

Yeah, that’ll happen. More likely Fox will cave in to Trump’s tantrum and resume their live broadcasts. They can make up the lost revenue with the tax cuts Trump will promise them. And their hosts who get preempted by the rallies will all get “exclusive” interviews. That’s how State TV works. Trump is learning well from his friends in Russia and North Korea.