For years Fox News has been the central clearinghouse for bigoted attacks on the Islamic faith. They have featured anchors and guests who assert that all Muslims are terrorists. They openly oppose freedom of religion when it is Muslims who are seeking it (remember the Ground Zero Mosque?). They virulently assault any person or group who advocates tolerance and cooperation with peaceful Islamic representatives, including American citizens. And this week they demonstrated their repugnant hatred once again.

On Friday, Sean Hannity converted his Fox News program into a liberal bashing festival of hate and deceit. He assembled a studio panel heavily weighted to conservative extremists to take on the subject of “Saving America.”

For some reason, the task of saving America had much to do with Anthony Weiner’s troubled campaign for mayor of New York City. There was little controversy on this matter since every participant agreed that Weiner’s behavior was unconscionable. However, one participant was critical of the debate because she felt it distracted from a much bigger problem:

Brooke Goldstein: “What’s amazing to me is that we’re spending time debating ‘Shmecklegate’ when Huma Abedin, who has connections to the Muslim Brotherhood, who is connected to the chief financier of Al Qaeda, is his wife and has top security clearance.”

To which Hannity replied: “This is a great point.”

Goldstein is regurgitating, and Hannity is concurring with, a long ago debunked lunacy that was invented by noted Islamophobe, Pamela Geller. The falsehood that Abedin is a Muslim Brotherhood double agent in the Obama administration has been spread by the likes of David Horowitz, Glenn Beck, Michele Bachmann, Steve King, and more. These cretins stuck to their slander even after GOP House Speaker John Boehner called their remarks “dangerous,” and Sen. John McCain slammed them as “an unwarranted and unfounded attack on an honorable citizen, a dedicated American, and a loyal public servant.”

Later on Fox News, anchor Lauren Green conducted an interview (video below) with author Reza Aslan whose new book, Zealot: The Life and Times of Jesus of Nazareth, explores the historical life of Jesus. Aslan is professor of religion with four degrees (including one in the New Testament) and twenty years experience studying, teaching, and writing about world religions. Nevertheless, the only thing that Green thought was relevant to the discussion was that Aslan is also a Muslim.

Green berated Aslan repeatedly about why he would write a book about Jesus. She seemed to be unable to comprehend that a scholar with impressive credentials in the subject would concern himself with a major historical religious figure who was not of his faith. Aslan politely pointed out that it is his job as an academic to write about these things. But after numerous efforts, Green continued to question his motives.

After enduring this barrage of nonsense, Aslan addressed it specifically wondering aloud why, instead of discussing the content of his book, they were arguing about whether he had a right to write it. He also pointed out that Green’s insinuations that he would have a negative bias toward Christianity were absurd considering that his mother and his wife are both Christians. But none of this seemed to have an effect on Green’s determination to find something sinister in Aslan’s intentions.

At one point, Aslan touched on an obvious hypocrisy in Green’s questioning. He wondered whether she would have any problem with a Christian author writing a book about Mohammed. As it turns out, a colleague of Pamela Geller, and the director of the anti-Islam Jihad Watch, Robert Spencer, wrote a book titled “The Truth About Muhammad: Founder of the World’s Most Intolerant Religion.” The title pretty much gives away the perspective of the author. However, that didn’t stop Fox News from interviewing him on numerous occasions. He has appeared on Hannity, Glenn Beck, Happening Now, and Fox & Friends, among others. They even identified this obviously biased Christian on the air as an “expert in Islamic law and history.” 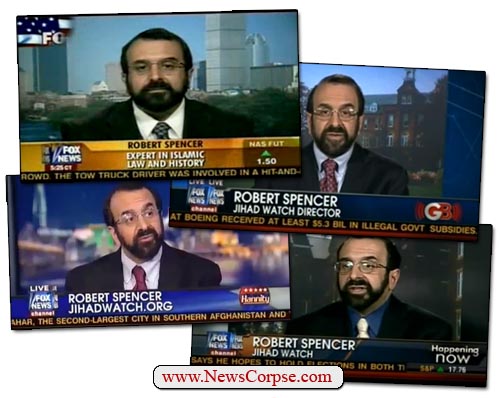 So, for some reason Fox considers it OK for a Christian extremist to write a viciously derogatory book about Muslims, but they find it totally inappropriate for a respected academic, who happens to be Muslim, to write fair and balanced historical look at Christianity. If there was ever any ambiguity as to whether Fox News harbored overt religious prejudice, these incidents should put the question to rest.

[Update] Media Matters has dug into the background of Fox anchor Lauren Green and found that she has reported on Muslims on several occasions despite being a devout Christian. She even wrote that only Christians can be truthful journalists:

“Journalists’ first obligation is to seek truth, and the only way absolute truth can be found is by measuring humanity’s idea of truth against God’s standards, she said. Therefore, the only way for a journalist to achieve ultimate success is to hold to the Christian faith.”

This really helps to explain the astonishingly twisted behavior of Green during her segment with Aslan. She doesn’t believe that Aslan, or any non-Christian, is capable of telling the truth. And this is the sort of openly bigoted reporter that Fox employs.