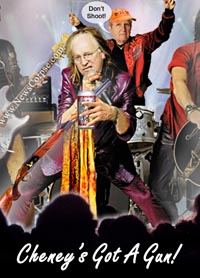 The hardworking journalists at Fox News managed to snag one of this year’s most eagerly anticipated exclusive interviews. After four days of silence, Vice President Dick Cheney stepped up to Birt Hume to make his first public comments about having shot a man in the face.

How Fox secured this editorial coup is beyond me. Maybe they know people in the White House. Or maybe Cheney just felt confident that he could stand up to to the notoriously withering brand of hardball journalism as practiced by the feared Mr. Hume.

Either way it further boggles the mind that, after winning this interview, the Fox editors decided to censor it. Media Matters has documented the deed:

In airing Brit Hume’s interview with Vice President Dick Cheney, Fox News omitted Cheney’s comments about drinking a beer the day he shot his hunting companion. Fox News even excluded the comments from what it said was the “full interview” posted on its website.

Why would Fox do such a thing? With their reputation for being fair and balanced you would think they would jump at the chance to showcase a public servant who was fairly stewed and unable to keep his balance.