Professional crybaby, Glenn Beck, let loose again today with a lament that the big, bad cable companies just don’t love him enough. Not that it matters, because he loves himself more than enough to compensate. 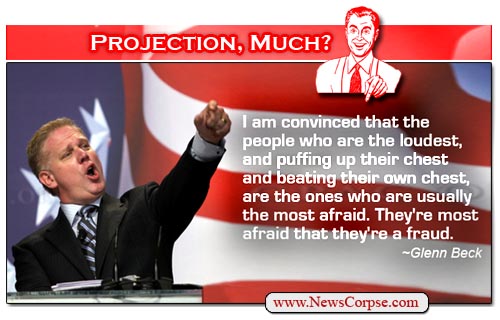 What triggered Beck’s latest self-pity party (video below) was today’s launch of the Al-Jazeera cable news network. Beck was inconsolably perturbed that a network with an Arab sounding name was invading the homes of decent Americans and infecting their brains with subversive messages and probably subliminal commands to kill Christian patriots. He called Al-Jazeera “the voice of the enemy.” And making it all the worse is that those same cable companies were refusing to carry his crackpot Internet video blog.

Beck: They don’t have room for an American-owned, American operated, and a network that only serves America. They’re not interesting in that one. But Al Jazeera? ‘Oh, we’ve got to get that one on the air right away. That’s crazy.

Absolutely crazy! Because a network that posts the rambling and hate-filled conspiracy theories of a former shock-jock, and wanna-be Messiah, is just so much more deserving of cable carriage than an awarding-winning international news network with a stable full of respected journalists. It’s crazy because there aren’t any other American owned and operated networks (except for all of them, including Al-Jazeera America). It’s crazy because, as Beck frets, the hard-earned dollars of his flock is being diverted to some nefarious purpose.

Can you believe it? You are funding Al Jazeera – when you should be funding him to pump propaganda into America. It couldn’t be more clear. After all, Beck is only doing what he’s doing for your sake. He isn’t interested in the millions of dollars he is sucking from the rubes who buy his podcast and his books and attend his revival meetings, etc. He is only there to serve you, the ignorant, glassy-eyed, disciples who need him to make sense of the world.

Beck: You don’t have time to follow all this crap. It’s our job to figure out what’s important and what you need to make the right decisions for your life and for your country. That’s MY job.

So are you ingrates, or what? Why aren’t you lavishing Beck with even more wealth? He’s begging you. He made a plaintive appeal to his audience to call Comcast and Time-Warner and DirecTV, to implore them to add Beck’s Holy Huckster Sideshow to their channel line-up. And again, he isn’t doing it for himself. He came right out and said so.

Well that explains what happened to Beck’s brains (and why they are so prominent on his wish list). It is also encouraging that Beck is so close to surrender. With just a little more patience, and the continued decline of his Congregation of the Gullible and Fearful, Beck may yet walk off and relieve us all of having to endure his moaning about how desperately unloved he is.

11 thoughts on “Glenn Beck Whines: Cable Carries “The Enemy” Al-Jazeera, But Not Me”