Yesterday there was a large scale demonstration in Washington, D.C. in favor of immigration reform. Protesters included national immigration advocacy groups, labor unions, and members of Congress. The rally was reported online by Fox News Latino, a Fox web site that panders to Hispanic audiences. The article noted that rally participants, including House Democratic Leader Nancy Pelosi, were seeking to advance a bill currently in Congress that “would tighten border security, get stricter on immigration enforcement and provide a path to legalization.” They led their report saying that….

“Thousands converged on the National Mall in Washington D.C. Tuesday to demand that Congress pass a measure that would overhaul the U.S. immigration system, and in particular, provide a path to legal status for undocumented immigrants.

“Capitol police also arrested scores of protesters, including eight members of Congress, who allegedly engaged in acts of civil disobedience as part of the rally.”

Despite the significance of the well-attended demonstration and the prominent participants, Fox News covered it in its own unique and characteristically bigoted way. Their only report on the rally did not address the issues at hand, but a peripheral matter that was more in keeping with their fixation on demonizing the Obama administration over the shutdown (or, as they ridiculously call it, the “slimdown”). Fox’s entire reporting on the rally was to note that it was held on the National Mall which they erroneously said was closed. 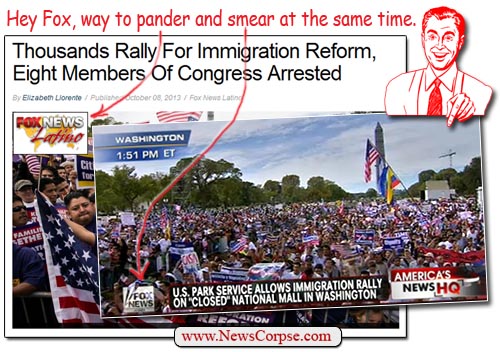 That’s it. Nothing about the eleven million undocumented residents currently living in the U.S., performing services, paying taxes, and contributing to the community. Nothing about those who were brought here as children and have broken no laws, yet live in a resident status limbo. Nothing about passing a reform measure that was the work of a bipartisan congressional legislative effort. And nothing about the substance of the rally itself. The only newsworthiness of the event, so far as Fox was concerned, was where it was held.

This is typical of the way Fox News insults their audience. They frequently misreport Latino news stories or fail to report them at all. Then they condescend to posting brief items on the Fox News Latino web site. It’s their way of pandering to the fastest growing demographic group in the nation (and the largest television market), while simultaneously maintaining their hostility to Latinos that the Fox News Channel diehards demand.

One thought on “The Anti-Latino Coverage Of D.C. Immigration Reform Rally By Fox News”