A couple of months ago, Pope Francis stunned many of his right-wing leaning flock when he came out strongly opposed to the economic inequality that has fractured many nations, including the Untied States. His admonition that “The world has become an idolator of this god called money,” could not have been a clearer denunciation of the chasm that separates the wealthy minority from the other 99% of society. Well, he’s done it again. 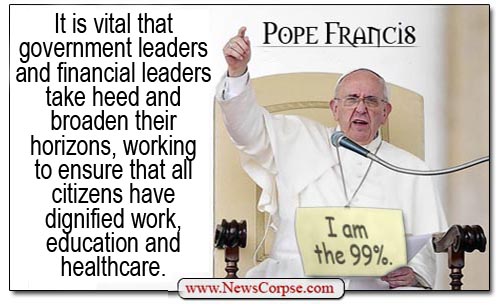 In an official Vatican “Evangelii Gaudium” (The Joy of the Gospel), The Pope went into even more detail about the greater harm of the greed and power associated with world markets and unfettered capitalism. I’ll let him tell it:

“Just as the commandment ‘Thou shalt not kill’ sets a clear limit in order to safeguard the value of human life, today we also have to say ‘thou shalt not’ to an economy of exclusion and inequality. Such an economy kills.”

“Human beings are themselves considered consumer goods to be used and then discarded.”

“In this context, some people continue to defend trickle-down theories which assume that economic growth, encouraged by a free market, will inevitably succeed in bringing about greater justice and inclusiveness in the world. This opinion, which has never been confirmed by the facts, expresses a crude and naïve trust in the goodness of those wielding economic power and in the sacralized workings of the prevailing economic system. Meanwhile, the excluded are still waiting.”

“While the earnings of a minority are growing exponentially, so too is the gap separating the majority from the prosperity enjoyed by those happy few. This imbalance is the result of ideologies which defend the absolute autonomy of the marketplace and financial speculation.”

“In this system, which tends to devour everything which stands in the way of increased profits, whatever is fragile, like the environment, is defenseless before the interests of a deified market.”

“As long as the problems of the poor are not radically resolved by rejecting the absolute autonomy of markets and financial speculation and by attacking the structural causes of inequality, no solution will be found for the world’s problems or, for that matter, to any problems. Inequality is the root of social ills.”

“The economy can no longer turn to remedies that are a new poison, such as attempting to increase profits by reducing the work force and thereby adding to the ranks of the excluded.”

“Politics, though often denigrated, remains a lofty vocation and one of the highest forms of charity, inasmuch as it seeks the common good. […] I beg the Lord to grant us more politicians who are genuinely disturbed by the state of society, the people, the lives of the poor!. It is vital that government leaders and financial leaders take heed and broaden their horizons, working to ensure that all citizens have dignified work, education and healthcare.”

As I have noted in the past, Fox News is the closest thing in U.S. media to a Vatican PR office, with a roster that is heavily weighted with Roman-Catholics. They include: Bill O’Reilly, Sean Hannity, Megyn Kelly, Bret Baier, Bill Hemmer, Brian Kilmeade, Andrew Napolitano, Jeanine Pirro, Laura Ingraham, Dennis Kucinich, Elisabeth Hasselbeck, and Father Morris. Rupert Murdoch, the CEO of Fox News parent News Corp was himself inducted into the “Knights of the Order of Saint Gregory the Great” by Pope John Paul II. And if that isn’t enough, the current Senior Communications Adviser in the Vatican’s Secretariat of State, Greg Burke, was previously the Fox News correspondent covering the Vatican, a position he held for ten years. 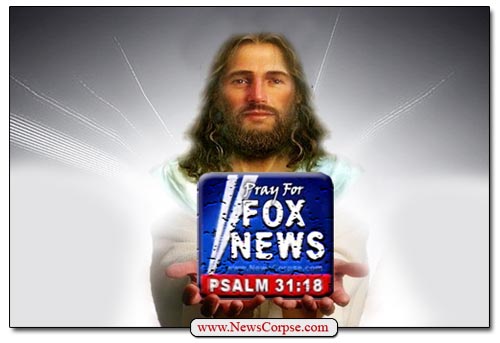 It is interesting to note how divergent these parishioners are from the philosophy of their spiritual leader, but it isn’t new. In February of 2012, Juan Cole compiled a list of doctrinal variances between the church and the conservative hypocrites. In March of 2010, Glenn Beck outright begged his disciples to “run as fast as you can” from any church that uses the words “social justice” or “economic justice.” In other words, renounce any parish that practices the teachings of Jesus.

A few weeks ago Sarah Palin said the nastiest thing she could think of about Pope Francis. She called him a liberal. A couple of days later she had second thoughts and apologized to the Pontiff, who probably couldn’t have cared less. I wonder if she is rethinking her apology now.

7 thoughts on “Pope Francis: Economic Inequality “Is The Root Of Social Ills””