In it’s ongoing struggle to find evermore outrageous atrocities to attribute to President Obama, Fox Nation has reported that Catholic groups are appalled that the United States is planning to close its embassy in Vatican City. There is just one little problem. 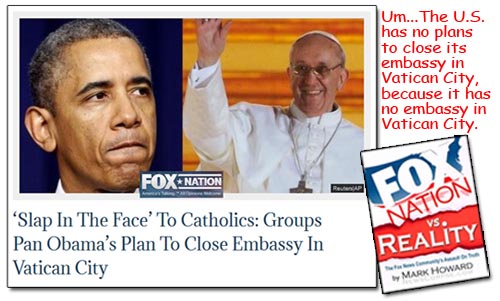 For more examples of Fox Nation’s departures from reality,
get the acclaimed ebook Fox Nation vs. Reality.

The United States does not have an embassy in Vatican City. Nor does any other country. The Vatican is simply too small to host any of these facilities, so they are actually headquartered in Rome. The truth of the matter is that the U.S. is closing one of its offices in Rome that houses the ambassador to the Vatican, and relocating it to a much larger compound that also houses the U.S. embassy to Italy. It will continue to have its own building and entrance, and its even a little closer to the Vatican itself.

This hasn’t stopped the right-wing media circus from hyperventilating furiously about some sort of imagined insult to Catholics. The Fox Nationalists, quoting from the “Moonie” Washington Times, which was quoting from Breitbart “made up” News, said that “The Obama administration, in what’s been called an egregious slap in the face to the Vatican, has moved to shut down the U.S. Embassy to the Holy See.” That actually goes even further into false territory because it doesn’t simply suggest a relocation, but an elimination, neither of which are true.

It is curious that this particular crockery should erupt in the days following a rather remarkable publication from the Pope that condemns unfettered capitalism as abusive to the poor and other excluded members of society that the church is duty bound to protect. The Pope even went so far as to repudiate the conservative gospel of “trickle-down economics” as a theory that “has never been confirmed by the facts.”

Could it be that the Pope’s unambiguous support for income equality and the moral principle that “all citizens have dignified work, education and healthcare,” has prompted the conservative fib factory to invent a new controversy as a distraction from a papal declaration that eviscerates conservative values?