This past weekend, the New York Times published a profile of John McCain’s wife, Cindy. Included in the article were facts relating to Sen. McCain’s adulterous relationship with his future second wife, as well as Ms. McCain’s troubles with drugs. These are simply factual episodes that any responsible biographical piece would have to address. 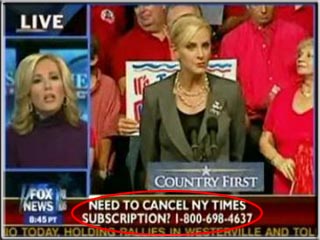 Predictably, the McCain campaign was outraged and immediately began shouting about media bias and tabloid journalism. Whereupon the masters of tabloidism, Fox News, came to McCain’s aid by parroting his complaints and even helping to punish the Times by providing viewers with a telephone number they could call to cancel their subscriptions. This all occurred during a “news” broadcast, not the O’Reilly Factor.

The hubris of Fox News never seems to find it’s peak. It would be one thing for them to report on the controversial article and McCain’s response. They might even follow that up with their own views as to the presence of bias in the article. At this point everyone knows that Fox shamelessly inserts their opinions into their reporting, and since McCain has already declared war against the Times, it’s only natural that Fox, the network of the Republican National Committee, would follow suit. However, by participating in a effort to encourage the cancellation of subscribers to the paper, Fox is crossing a new line that is much further out in the sand than was previously drawn.

Aside from the obvious advocacy on the part of Fox News for the McCain candidacy, and their staking out a position on the paper’s coverage, Fox News has a vested financial interest in harming the Times. Fox News is owned by Rupert Murdoch’s News Corp. which also owns Times competitors the New York Post and the Wall Street Journal. So this partisan interference in political affairs is also a brazen attempt to damage a competitor in the marketplace.

The many tentacles of the Murdoch empire continue to raise questions about monopolies and anti-trust. Is it proper for one News Corp. property to openly advocate that customers abandon a competitor of another property? If so, could NBC, which is owned by General Electric, broadcast appeals to their viewers to stop purchasing light bulbs or refrigerators made by their competitors? Could ABC, which is owned by Disney, run stories that advise people not to attend Six Flags Amusement Parks in an effort to boost attendance at Disneyland?

These are some of the easily anticipated problems with the sort of unregulated consolidation that has been rampant in the recent past, particularly in Republican administrations. If anti-trust laws aren’t taken seriously and vigorously enforced, the corporate chieftains end up controlling and manipulating markets to the detriment of competition and consumers. Barack Obama is on record in opposition to the Bush policy of ignoring, or advancing, corporate collusion, consolidation, and other anti-competitive activity:

“We’re going to have an antitrust division in the Justice Department that actually believes in antitrust law. We haven’t had that for the last seven, eight years.”

If Obama follows through on that pledge, we might begin to see some progress toward a truly open, diverse, and fair marketplace in the media and elsewhere. Regulations will need to be refined and some conglomerates will need to be broken up. Real reform in this area will be difficult to achieve, but it is essential if we want a system that provides a level playing field for everyone.