Fox News has announced the signing of former Duck Dynasty patriarch Phil Robertson to an exclusive contract to host a new program on the cable news network. 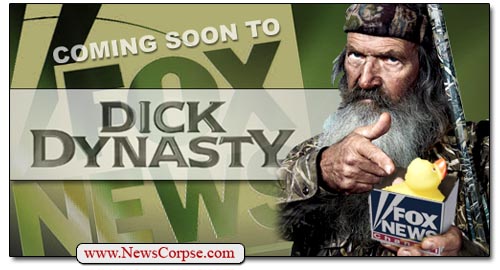 In the wake of the controversy over anti-gay remarks made by Robertson, The A&E Network put the Duck Dynasty star on an indefinite suspension. Shortly thereafter, conservative activists and homophobes rushed to the defense of the unreality character with accusations of liberal media bias and censorship.

Not surprisingly, Fox News personalities were among the first, and most vocal, defenders of Robertson with Sean Hannity saying that Robertson’s comments were “old fashioned traditional Christian sentiment and values.” Fox’s Todd Starnes dismissed the comments as merely reflecting “the teachings of the Bible.” Sarah Palin warned that “Free speech is an endangered species.” Erick Erickson said that “Robertson said precisely what true Christians believe.”

These reactions illustrate the strategy behind Fox’s signing of Robertson. He is a Christian extremist who preaches that gays are bound for Hell. He is racist who believes that blacks were happily singing in the cotton fields during the Jim Crow era. He displays a level of ignorance on most subjects that is pitiful. And he has become wealthy by deceiving people into thinking that he is a redneck hillbilly. In short, he shares all of the same rightist positions and personality traits of the rest of the Fox News roster and will fit in nicely at their holiday parties.

Critics, however, object to the characterization of racism and homophobia as traditional Christian values and they reject Fox’s effort to claim to be the authority on such matters. Open-minded Christians put their faith in the actual teachings of Christ (who admonished his followers to refrain from judging others) and not in the sanctimonious bellowing of cable TV pundits. They also recognize that free speech is available to everyone, not just bigots who want to be able to spew their hatred without consequence.

Fox News CEO Roger Ailes is said to have personally directed the Robertson signing. It is consistent with his philosophy of demonizing the gay community that he lived in fear of, and built a bomb-proof office to protect himself from. Likewise, his security measures shielded him from dark-skinned and Muslim people of whom he was also afraid.

With Robertson’s addition to the Fox family, Ailes will have another ideological ally to advance his Tea Party agenda. Plus, there will be an experienced marksman in the building in the event of an attempt on on his life or an outbreak of civil unrest. Insiders are speculating that the new program will have spring premiere so as not to interfere with duck season.