Just as every December comes with the annual Fox News War on Christmas, there is a right-wing ritual that engages whenever President Obama and his family take a vacation. The wingnut whine factory ratchets up its outrage at the deplorable notion of a presidential holiday, particularly if the president isn’t a Republican whose vacations are always proper and well deserved. 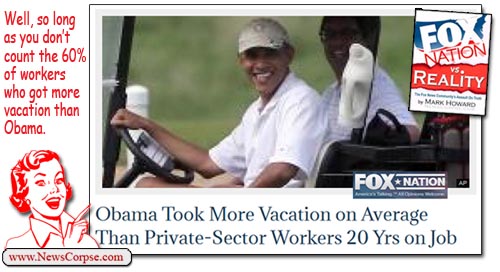 The latest hissy fit being thrown by the right comes from the Fox News community website Fox Nation (whose many documented lies can be found in the acclaimed ebook Fox Nation vs. Reality). The article sports a shocking headline that asserts that President Obama has taken more vacation time than private sector workers – as if that comparison had any relevance to anything. After all, how many private sector workers are on call 24 hours a day, seven days a week, even while they are on vacation?

But even the obvious inaptness of the example doesn’t come close to the dishonesty proffered by the Fox Nationalists. Their source is CNSNews, a division of Brent Bozell’s uber-rightist Media Research Center. CNSNews in turn cites as its source the rabidly right-wing Government Accountability Institute (GAI), which was founded and run by the same pseudo-journalistic charlatans who bring you Breibart News.

GAI’s report takes data from the Bureau of Labor Management and spins it into an unrecognizable slop of fraudulent PR. They state that Obama’s average vacation days per year (21.5) exceeds that of private sector workers who have been at their jobs for five years, which GAI reports as 19 days. However, a quick glance at the actual BLM data (pdf) shows that the 19 day figure is a mean average that is brought down by the 20% of workers who get less than 15 days of vacation, and some as little as two days. In fact, the number of employees who get 15-19 days off is only about 20%. The majority of private sector workers (60%) get greater than 20 days of vacation. So the truth that GAI and Fox is concealing is that most private sector workers get more vacation than President Obama. That, of course, is the complete opposite of what their headline and article assert.

And just to add some context, these conservative dissemblers also fail to note that Obama has taken far fewer days off than his predecessor, George W. Bush. Obama’s average of 21.5 vacation days per year makes him look like a workaholic compared to Bush’s 110 day average per year – more than five times Obama’s. But if you’re a rich white Republican you can’t be accused of being lazy or shiftless when you are enjoying some leisure time at your ranch in Crawford or on your yacht in Kennebunkport.

13 thoughts on “Fox Nation vs. Reality: The Obama Vacation Myth”