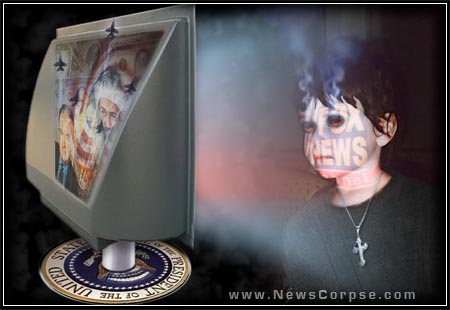 Last week, Bush ventured to Gautier, Mississippi, to commiserate with victims of Hurricane Katrina. It was a typical photo-op that made no news other than that the president showed up. But in preparations for the visit, two men arrived at the home of Jerry Akins to make inquiries about his post-hurricane experience. They identified themselves as reporters from Fox News, but the local paper, Biloxi’s Sun Herald, tells the real story:

Jerry Akins, who received Bush, mentioned that on the Friday before Bush arrived, two men approached him identifying themselves as members of the media.

He said the men told him they were with Fox News out of Houston, Texas, and were on a “scouting mission” for a story on new construction. They took pictures inside Akins’ house, which is under construction and looked up and down the road in the neighborhood.

It wasn’t until after Bush left that the imposters revealed their deception. Even then, they were less than forthcoming. They flashed lapel pins with the presidential seal, leading the Akins’ to believe they were with the Secret Service – which they were not.

Ken Lisaius, speaking for the White House, claimed that this was not appropriate behavior and that the personnel would be verbally reprimanded, but he refused to identify them or for whom they were working. Fox News would make no comment at all.

When official representatives of the government begin masquerading as journalists, the credibility of both institutions is seriously damaged. Citizens will become suspicious of those identifying themselves as reporters if they believe that the alleged reporter may be lying. Likewise, people will learn to distrust government agencies if they know that their agents are dishonest. And seeing as how most Americans are already suspicious of the media and distrustful of government, the actions of this White House and its staff aren’t doing anything to help matters.