It’s been less than 24 hours and already the wheels are coming off of Sarah Palin’s wagon. Fox News’ Campaign Carl Cameron is reporting what those of us with a functioning cerebral cortex already knew: Sarah Palin is an idiot.

Cameron’s sources with the McCain campaign are leaking tales of infighting between the Palin and McCain camps. She is characterized as a diva who would not take advice from staff, refused to be prepared for interviews and debates, and threw temper tantrums when faced with negative press. Even worse they are revealing the depth of her stupidity, or as Cameron describes it, “a lack of knowledgeability” (right, and Stevie Wonder has “a visionary deficiency”). Palin apparently couldn’t name the countries signatory to NAFTA. She didn’t know that Africa is a continent, and not a country. And Cameron says to expect more of these bimbotic disclosures in the days ahead.

But, as usual, the real gems come from Palin herself. In some off-the-cuff remarks she declares her intention to restore credibility to journalism:

“I want to make sure Americans do understand that there’s a little disappointment in my heart about the world of journalism today and I don’t want any individual journalists to take it personally but I have such great respect for the role of the media in our democracy. It is a cornerstone. It allows for checks and balances but only when there is fairness and objectivity in the reporting.

And I want to make sure that Americans can have great faith in that aspect of our society, the media. So whatever I can do there to help and actually be able to allow credence to be giving to the media, I want to help in that respect. That’s where I start as a journalist, receiving a journalist degree, my foundation is, again, with great respect for what the vocation is all about. I want to help restore some credibility there.”

She really does have the gift of gibberish. However, it stretches credulity for a candidate for the vice presidency, who deigned to hold a single press conference, to profess to have respect for journalism as a cornerstone of society. Her notion that the press provides checks and balances only when there is fairness and objectivity forgets that opinions and editorials are also a part of the profession. What she is really arguing for is an end to criticism, particularly of her.

She wants to make sure that Americans have faith in the media and refers to the degree she received in journalism (from the University of Idaho in Moscow, ID) as her “foundation.” But the only use she ever made of it was a brief stint as a weekend sportscaster in Anchorage. Nevertheless, she believes that she can restore credibility to the “liberal” media despite her inability to name a single newspaper or magazine that she has read. 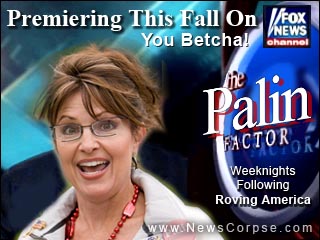 Is this a foretelling of an interest to return to her journalistic roots? In response to questions about her post-campaign activities she said that she would like to have a public role, but not in a partisan sense. That would rule out politics, but it wouldn’t prevent her from setting up shop on talk radio or, more likely, Fox News. She still has another couple of years to kill as governor of Alaska, but that shouldn’t get in the way of her developing the pilot for the Palin Factor and premiering it in the fall of 2010. The question is…will journalism survive long enough for her to get around to saving it?

3 thoughts on “The Disappointment In Sarah Palin’s Heart”