Rupert Murdoch, the 83 year old chairman of 21st Century Fox, the parent corporation of Fox News, is very upset. Apparently any enterprise that expresses a firm belief in civil liberties and equality is subject to the wrath of Murdoch.

In response to the announcement by the makers of Guinness beer that they would not be a sponsor of New York City’s St. Patrick’s Day parade due to the organizer’s exclusion of LGBT participants, Murdoch put out this tweet:

“Where will this end? Guinness pulls out of religious parade bullied by gay orgs who try to take it over. Hope all Irish boycott the stuff.” 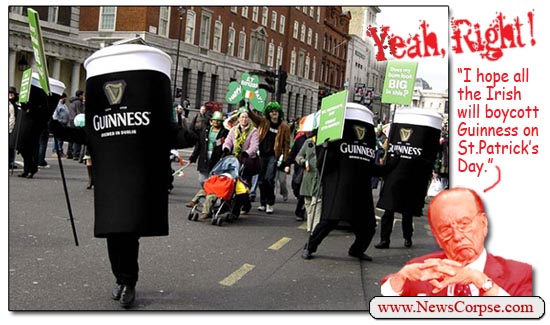 It’s rather impressive that Murdoch could squeeze so much wrongness into such a short space. First of all, to describe the annual event on Fifth Avenue as a “religious parade” requires an extraordinary ability ignore the festival’s Bacchanalian tradition. So unless the religion Murdoch is referring to is Paganism, it’s hard to accept his opening premise.

From there Murdoch characterizes gay organizations as bullies, simply because they want to be included in a public celebration along with everyone else. Would Murdoch have taken the same position if it were African-Americans or Jews who were excluded? He went further to accuse the advocates for gay rights of trying to take over the parade. Where he got that idea is a mystery that he never explains. And his assertion that the folks at Guinness were bullied is contradicted by their own public statement which was made freely and without duress:

“Guinness has a strong history of supporting diversity and being an advocate for equality for all. We were hopeful that the policy of exclusion would be reversed for this year’s parade. As this has not come to pass, Guinness has withdrawn its participation. We will continue to work with community leaders to ensure that future parades have an inclusionary policy.”

A fair and balanced reading of that could not possibly be construed as having been coerced. What’s more, Guinness competitors Heineken and Sam Adams have taken the exact same positions on Gay rights and public events.

But perhaps the most disturbing part of Murdoch’s tweet is his suggestion that Guinness be boycotted due to their having stood up for equality. Does he really believe that Irish Americans, or any other celebrant, is going to abstain from drinking the most famous Irish beer in the world on St. Patrick’s Day? The only explanation for such a stupendously idiotic remark is that he is either drunk or senile.