In the past few weeks Americans For Prosperity (AFP), the Koch brothers financed Tea Party propaganda outfit, has produced a couple of anti-ObamaCare ads that featured alleged “victims” of the health insurance reform. The campaign ended in embarrassment for AFP when the phony “horror stories” were revealed to be utterly false. Independent analysis of the insurance coverage available to the subjects of the ads proved that they were better off under ObamaCare than they were without it. 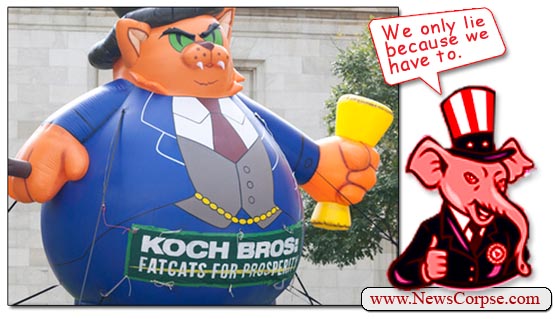 So AFP abandoned that strategy and released an ad that consisted of a lone spokeswoman making vague criticisms of ObamaCare in a tone of voice dripping with despondency and a tag line bemoaning that “It just doesn’t work.” However, even with this tactic of avoiding any verifiable content that might get them tied up in another counterfactual morass, they still managed to produce a thoroughly dishonest commercial that received a “False” rating from PolitiFact.

The principle claim in the new ad was that “millions are paying more and getting less.” However, as PolitiFact’s research shows, there is no truth to the claim:

PolitiFact: Americans are getting more benefits under the law in a number of ways — including, in some cases, being able to buy affordable insurance for the first time.

The law also caps out-of-pocket costs, providing greater protection from exorbitant hospital bills. The most a person could pay for health care in a year is $6,300; the most a family can pay is $12,600.

Before the law passed, some insurers capped annual or lifetime benefits, forcing people who thought they were covered to pay large hospital bills once they passed the threshold.

People with pre-existing conditions are also seeing a lot more benefits, since they previously couldn’t buy a policy at all.

PolitiFact concludes by saying that “At worst, they’re paying more to get more, though in many cases they’re actually paying less.” They also include a chart that shows that, while insurance premiums have risen since ObamaCare became law, the rise is slower than in any of the previous fourteen years. What critics of ObamaCare always seem to forget is that before it came along insurance companies routinely raised premiums, canceled plans, narrowed doctor networks, and declined coverage. They also refused patients with preexisting conditions, terminated patients when they filed claims, and capped benefits at amounts far below realistic costs for care.

Prior to ObamaCare it was always the insurance company that came between the patient and the doctor. And their motivation was strictly related to increasing profits. ObamaCare’s mandates are aimed at improving health care and medical outcomes, not enriching corporations and their executives.

As for Americans For Prosperity, the Koch brothers, and their PR division, Fox News, you have to wonder, if ObamaCare is so terrible, then why do they have to repeatedly lie about it to make it look bad? Why can’t they find any real horror stories? Why can’t they tell the truth about the economics of the program? Why do they so feverishly try to frighten people away?