Halloween is approaching and the hobgoblins of conservative minds are already spinning nightmarish tales of the horror of the Affordable Care Act (aka ObamaCare). Actually, they have been doing it for quite some time dating back to at least March of 2010 when Tucker Carlson’s Daily Caller published an article headlined “IRS looking to hire thousands of armed tax agents to enforce health care laws.” Fox News re-posted the article on their community web site and Fib Factory, Fox Nation despite the fact that it was a complete fabrication and was debunked by the Annenberg Center’s FactCheck.org 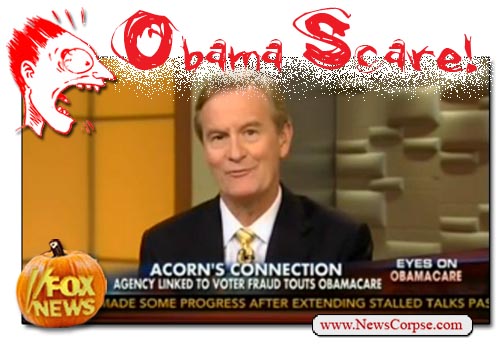 This year the campaign to recast a program that makes health insurance accessible to millions of Americans as a plague of locusts has risen to fever pitch. The Republican Party and conservative media has pulled out all the stops in a strategy aimed at scaring people from signing up with the hope that low enrollment will collapse the system. President Obama had the same concerns last month when he said…

“What you’ve had is an unprecedented effort that you’ve seen ramp up in the past month or so that those who have opposed the idea of universal health care in the first place — and have fought this thing tooth and nail through Congress and through the courts — trying to scare and discourage people from getting a good deal.”

These are not the hackneyed GOP talking points about death panels, job killers and government bureaucrats coming between patients and doctors. These are far more fanciful efforts that stretch the limits of credulity and appear to have more in common with satire than actual news reporting. Yesterday Rush Limbaugh “ruminated” (sourced to Breitbart) that ObamaCare may just be a ruse to set up gun registries in the United States. This is what it has come to as ObamaCare has finally reached the consumer stage and conservatives are desperate to keep people from discovering its benefits. For instance…

1) Fox News Warns That If You Sign Up For ObamaCare Hackers Will Steal Your Life Savings
On an episode of “The Real Story” on Fox News, host Gretchen Carlson introduced an ominous new strain of fear mongering to demonize ObamaCare. She interviewed John McAfee, the anti-virus software developer who is presently a fugitive from a murder investigation in Belize. He asserted a wild accusation that visitors to Healthcare.gov are going to be victimized by hackers who will steal their identities and/or drain their bank accounts.

However, neither Carlson nor McAfee actually provide any evidence of such a threat. In fact, when directly asked about it. McAfee diverts from the question and lays out a completely different threat that has nothing whatsoever to do with the ObamaCare web site. He alleges that nefarious individuals could set up their own unaffiliated web sites in the hopes of luring naive people of whom they will seek to take advantage. Of course, that is a threat that exists every day for every web site, and has since the Internet began. But visiting Healthcare.gov does not expose anyone to these phony sites as implied by the fear mongers at Fox.

2) WorldNetDaily Reports “Obama ‘Crashing Health-Care Site On Purpose'”
This article asserts that the President is so afraid that insurance shoppers will learn that ObamaCare is really more expensive than the old system that he deliberately caused the website to crash to keep people from seeing the rates. No one is defending the botched launch of the insurance exchanges, however, the notion that the technical glitches were intentionally caused by Obama is delusional.

WND’s argument (supported by links to Rush Limbaugh) that rates will increase leaves out the subsidies and tax credits that are available for many applicants. With these adjustments, premiums for most people will be substantially lower. The administration would, therefore, be anxious for consumers to have access to that information and would not be putting obstacles in their path.

3) Rand Paul: Take ObamaCare Or Go To Jail
The Tea Party darling Rand Paul has made innumerable false statements about virtually every policy that has emanated from the White House. But none surpass the diversion from reality than when he said “They say take [ObamaCare] or we will put people in jail. People say we aren’t going to put anybody in jail. The heck they won’t. You will get fined first. If you don’t pay your fines, you will go to jail.”

That’s interesting coming from someone who has frequently complained that no one in Congress has read the Affordable Care Act. If he had read it himself he would have known that the law explicitly prohibits criminal consequences for non-payment of fines. It states “In the case of any failure by a taxpayer to timely pay any penalty imposed by this section, such taxpayer shall not be subject to any criminal prosecution or penalty with respect to such failure.” It rarely gets more clear than that, but the mission to frighten the public exceeds the motivation for truth on the part of GOP scare-meisters.

Notably, Bill O’Reilly insisted that no one on Fox News ever claimed that failure to enroll in ObamaCare would lead to a prison sentence, but he was hilariously embarrassed by the videos that proved otherwise, including on his own program.

4) Right-Wing Think Tank Mortified That ObamaCare Web Site Links To Voter Registration Form
This is a particularly curious horror story as it seeks to raise an alarm over something that ought to be regarded as a civic duty. Nevertheless, the conservative MacIver Institute (a Koch brothers funded operation) published an article that implied there was some sort of heinous objective on the part of the Obama administration for having included a link to a voter registration form on the ObamaCare website. This startling revelation is met with foreboding by MacIver and a flurry of right-wing media outlets that disseminated MacIver’s story including National Review, Glenn Beck’s TheBlaze, Breitbart News, the Daily Caller, and of course, Fox News. All of their reports agreed that this was a clandestine attempt to register only Democratic voters despite the absence of any partisan framing. MacIver even asks specifically “[W]hat does registering to vote have to do with signing up for Obamacare?”

The core of the right’s trepidation is rooted in a more fundamental aversion to the act of voting itself. It is why they are continually erecting new barriers to voting, such as unreasonably stringent identification requirements, shortening or eliminating early voting periods, wholesale purges of voter rolls, and of course, brazenly discriminatory gerrymandering. Democrats, on the other hand, have sought to expand voter turnout with bills like the 1993 National Voter Registration Act (aka Motor Voter) that mandates that certain government agencies provide people with access to voter registration. In fact, it is that twenty year old law that requires the ObamaCare administrators to make voter registration available. MacIver, and their similarly mortified conservative comrades, are either unaware of this, or are deliberately feigning ignorance in order to rile up their conspiracy-prone base.

5) Weekly Standard Finds Imaginary Threat On ObamaCare Website
The ultra-conservative Weekly Standard dispatched their crack reporters to ferret out what they portrayed as an ominous security threat on the Healthcare.gov website. What they found were comments in the site’s source code that said that “You have no reasonable expectation of privacy regarding any communication or data transiting or stored on this information system.” The Standard notes that these comments were not visible to users and were not part of the site’s terms and conditions. But that didn’t stop them from implying that users would be still be bound by it because “the language is nevertheless a part of the underlying code.” Not really. It’s only a part of some inoperative text that carries no more obligation than some discarded notes.

This is another situation where you have to wonder whether these people are embarrassingly stupid or brazenly dishonest. There is a reason that this language was not visible. It was deliberately removed with the use of HTML comment tags by the site’s programmers. It was undoubtedly edited out because it was not an accurate expression of the site’s privacy policy. It does not mean that users are agreeing to a secret clause permitting the government to spy on them as the Standard implied. If any of these “reporters” had a fourteen year old at home they could have learned what this is about. But that would have interfered with their goal which is to leave Americans with the false impression that some hidden danger lurks beneath the surface of ObamaCare.

6) Fox News Fears ACORN Is Back To Push ObamaCare
The Curvy Couch Potatoes over at Fox & Friends had a jolly old time resurrecting their fear of a community organizing enterprise that no longer exists. ACORN was wrongly hounded out of business by right-wing opponents after pseudo-journalist and convicted criminal, James O’Keefe, distributed some deceitfully edited and libelous videos. But that hasn’t stopped conservative media from exhuming the corpse whenever they are in need of a sensationalistic story, as demonstrated by Fox co-host Elisabeth Hasselbeck who announced that “We’re getting information that ACORN operatives are trying to sign people up for the Affordable Care Act.”

While ACORN was never found to have engaged in any unlawful activity, there was a bill passed that prohibited them from receiving federal funds. However, there is nothing in the law that prevents organizations with former ACORN staff from getting federal grants. In fact, there isn’t even any current law that prevents ACORN from getting grants as the previous ban was not included in the latest Continuing Resolution. Fox is brazenly misrepresenting the facts in an attempt to reignite fears of the old ACORN bogeyman. And they upped the terror ante by further alleging that ACORN would use your personal medical and financial information against you politically. They never revealed how that would occur, or to what end, but that isn’t the point. Their only interest is in spreading fear, no matter how irrational and unsupported.

Conclusion:
The zealousness with which these right-wing propagandists pursue their disinformation campaign is evidence of their own fear that Americans will come to appreciate having access to affordable health care. Therefore, they see their mission as derailing the program before that eventuality unfolds. Their tactics get more extreme and absurd the closer the program gets to gaining acceptance. A particular target of their attack is young people whose participation is important for the program to succeed. Consequently, opponents have launched a well-funded campaign (thanks to the Koch brothers) to scare off young consumers. Generation Opportunity has already released the now notorious “Creepy Uncle Sam” videos that make false implications of government intrusion into medical care. Next they are embarking on a twenty city college tour to mislead students.

PolitiFact has reviewed sixteen claims made by ObamaCare detractors and found all of them false. Twelve of those were designated “Pants On Fire” lies. If there is one question that begs to be asked, it is this: If ObamaCare is so terrible, then why do opponents have to lie so much about it?

7 thoughts on “OBAMA SCARE: The Right’s Fright Offensive To Scare People Away From Affordable Health Care”