Believe it or not, there are actually living relics of the Dark Ages who have the audacity to publicly wonder as to whether artists are real people. One of them is Georgia’s Republican Congressman Jack Kingston who, addressing what he felt were wasteful provisions of the stimulus bill, said the following:

Someone needs to tell Rep. Kingston that some of the real people who are out of work are artists, and that artists are more than the celebrities whose fame creates thousands of jobs. They are people who write textbooks as well as novels. They design ads for local businesses to help them to prosper. They create products in every industrial field, which puts other people to work manufacturing them. What’s more, some of those who are out of work are real people who have labored in jobs that support the arts like electricians, caterers, carpenters, truck drivers, seamstresses, ushers, janitors, printers, and accountants. 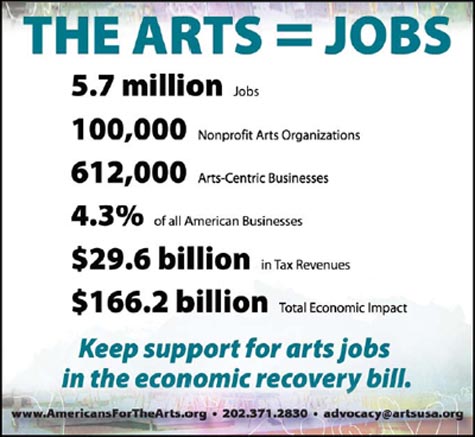 Kingston should surf over to the web site of AmericansForTheArts.org, where he would learn that 5.7 million people are employed in the arts; that the arts occupy a $166 billion chunk of our economy; that the arts generate almost $30 billion in taxes.

Kingston might then be able to figure out that $50 million is a pretty cheap way of putting millions of real people to work and boosting local economies across the country. Then he could tell his pal Rep. Mike Pence (R-IN) to stop asking stupid questions like this one:

“…what does $50 million to the National Endowment for the Arts have to do with creating jobs in Indiana?”

The stimulus bill, as passed by the House, contained the NEA grant. In the Senate, however, it was removed by an amendment by Sen. Tom Coburn (R-OK) that lumped arts funding in with a bunch of other projects. The amendment passed 73-24 with the votes of some supposedly art-friendly members such as Dianne Feinstein, Chuck Schumer, Bob Casey, and Russ Feingold. It stipulated that…

None of the amounts appropriated or otherwise made available by this Act may be used for any casino or other gambling establishment, aquarium, zoo, golf course, swimming pool, stadium, community park, museum, theater, art center, and highway beautification project.

At this point I think it would be appropriate to note that Coburn’s daughter, Sarah, is a budding opera singer. She will be opening in November at the Los Angeles Opera playing in Handel’s “Tamerlano” opposite Placido Domingo. The LA Opera has received hundreds of thousands of dollars from the NEA over the years, but today, like so many arts enterprises, they are in dire straits. Domingo, the Opera’s general director, deferred his salary to reduce costs. Last month they announced that they would have to…

“…lay off 17 employees, stage fewer performances and reduce its operating budget by a quarter to cope with falling donations and reduced endowment income.”

For now, Tamerlano is still on the Opera’s calendar. But by November it may be a different story. I’m sure the Senator’s daughter/diva will be fine. I’m not so sure that the same can be said of the workers laid off by this facility, or hundreds of others – to say nothing of the related workers and small businesses that depend on these venues and other artistic enterprises. They number in the millions and, contrary to the insensitive blathering of Pence, Coburn, and Kingston, they are real people.

2 thoughts on “Are Artists Real People?”