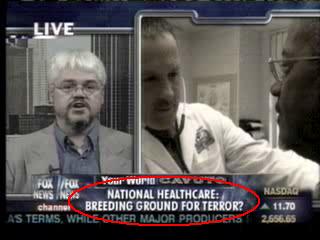 Neil Cavuto, Fox News VP and host of “Your World”, has a consistent record of misrepresenting the facts of pretty much any issue he addresses. Whether it’s the economy, national security, climate change, etc., you can rely on his determination to construct the most absurd and untrue arguments to advance his partisan agenda.

Healthcare has long been on that list of subjects as evidenced by the ridiculous graphic above from his program in July 2007.

Recently he has spent much of his program presenting a parade a of patients disappointed by the healthcare they have received in Canada. These unfortunate folks have had to endure some sort of healthcare calamity that they and Cavuto characterized as the inevitable consequence of national healthcare. The result of this substandard care, according to Cavuto, is the creation of a swarm of medical tourists fleeing Canada for superior treatment here in the U.S.

Amongst the guests that Cavuto welcomed as witnesses were a couple of Canadians who came to warn America of the horrors of free, accessible healthcare. However, in both cases the patients’ stories revealed that the U.S. system was actually worse than the one they were allegedly fleeing.

Shona Holmes told Cavuto that she had to mortgage her house to get treatment in the U.S. Lucky for her, she had a house to mortgage. Americans facing similar ordeals have lost their homes and gone into severe debt from which they may never recover. And those without homes have no options whatsoever, unlike Holmes and her fellow Canadians.

Lin Gilbert suffered from debilitating back pain that she says was untreated in an untimely manner in her native Vancouver. She was also unemployed and on welfare. Eventually she got the surgery she needed and is pain free today. It cost her nothing. She has no debt related to her medical treatment. An American with the same problem would still be suffering or would have racked up an unmanageable debt that would haunt them and their family for the rest of their life.

I can’t speak to what delayed the treatments in Canada for these women, but surveys show that they are the exceptions. Most Canadians are satisfied with their healthcare program, with an overwhelming 82% saying that they prefer their system to a private system like that of their neighbors to the south. Furthermore, a Gallup poll showed that Canadians are far more satisfied with their system than we Americans are with ours.

In what may be the most outrageous tale of medical panic, Cavuto invited an American, Linda Dorr, to his program to describe her condition and the choices she made. She was diagnosed as having the beginning stages of breast cancer. She was covered by insurance and there were many treatment options available to her, but she elected to have a double mastectomy because – if you can believe this – she was afraid that if Obama’s healthcare plan went into effect, and she needed further treatment years down the road, that it would not be approved by the government health bureaucrats that she assumed would be rationing her care in the future.

Think about that. The double mastectomy was not medically indicated. There was no reason to presume that less intrusive measures would not have been effective. There was no reason to believe that she would ever need such drastic surgery. What’s more, there was no evidence that, should her condition have deteriorated, she wouldn’t have been approved for whatever additional treatment she would have required under the Obama plan. In fact, considering the way the Congressional process is proceeding, there is a possibility that Obama’s plan will never be implemented at all. So based on the fear that a legislative program that has not even been voted on might eventually pass, and that the this phantom plan might impose some sort of harsh rationing that would deny treatment to certified breast cancer patients, and that she might have a more severe recurrence of her cancer – on the basis of all of those assumptions she elected to have a double mastectomy that was not presently necessary and might never be. And her doctor performed it!

As far as I’m concerned, her decision making skills were impaired, perhaps understandably, due to her diagnosis. It would be an understatement to say that her election was an overreaction to a set of circumstances that had not, and might never, take place. Her doctor, on the other hand, should have his license revoked for performing an operation that was not medically indicated simply because of his patient’s irrational and unfounded fears.

The broader objective of Neil Cavuto’s cavalcade of discontented Canadians, and one delusional American, is to steer public opinion away from meaningful healthcare reform. It is a deliberate campaign to foment fear and distrust of reforms that he casts as foreign and risky. He has embarked on a mission to scrape up every disgruntled Canadian he can find and imply that there is a swarm of them trampling across the border in bandages and wheel chairs, moaning and praying as they beg to be admitted to our hospitals of mercy.

There’s just one thing ….. Not only is there no such exodus from Canada, the medical refugees are actually heading out of the U.S. in much larger numbers than those coming in.

Despite Cavuto’s dishonest attempt to portray America as a haven for the world’s sick who are flocking here for the best healthcare in the world, the truth is quite the opposite. A Deloitte study last year revealed that about 400,000 people worldwide sought care in the U.S., while more than twice that many Americans went abroad. And the number of American medical adventurers is predicted to grow to six million by next near. A poll of Americans by Gallup showed that as many as 40% would consider leaving the U.S. for treatment if the quality was the same and the costs significantly cheaper. Those criteria have already been met to the satisfaction of hundreds of thousands of Americans.

Yet disinformation agents like Cavuto still manufacture witnesses to argue against reality. And it isn’t just Cavuto…

The facts are obviously contrary to the ravings of these lunatics. And in their ignorance, they continue to assert that the as-yet unwritten proposal constitutes a “government-run” plan despite the fact that no version of the known drafts could accurately be described that way. Even the comparison to Canada is misleading because no one has proposed a Canadian-style plan either.

So the next time you hear xenophobic cheerleaders espousing the fiction that the United States has the best healthcare in the world, remember the facts outlined above. Remember that the World Health Organization ranked the U.S. 37th in the world. Remember that those falsely bragging about America’s healthcare preeminence are generally well off, well insured, and well indebted to the institutions, corporate and political, that profit from the status quo.