Somewhere in the bowels of the Republican led Congress, Speaker John Boehner and his lieutenants are plotting the formation of a strictly partisan committee to dredge up more slanderous falsehoods about the tragedy in Benghazi nearly two years ago. It’s the continuation of an effort that has produced zero evidence of any wrongdoing by the administration after months-long hearings by four other committees, as well as several investigations by independent agencies. 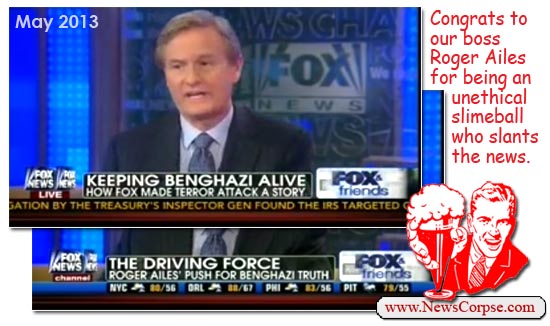 The Select Committee on Benghazi, to be chaired by a raving wingnut, is a gift to Fox News who has been lobbying for such a panel for more than a year. Leading that campaign is Fox’s own chairman and CEO, Roger Ailes. And if there were any doubt that this agenda was set by his directive, this video from May of 2013 should put that to rest:

Notable from this year-old broadcast is Fox anchor Steve Doocy’s remarks that proudly brag about the role that Fox and Ailes played in “pushing” the phony story.

“Fox News has been doing this story from the get-go. And the mainstream media, the Daily Show, has mocked us for covering Benghazi. And now everybody else is catching up. It’s been a story they’re realizing. One of the reasons we’ve followed it is Roger Ailes, our chairman and CEO. […] Had Roger and Fox News not pushed this story the White House would have just left it in the dust.”

However, Doocy’s victory dance to celebrate Fox’s success in exposing malfeasance in the White House may have been somewhat premature. A year later there is still no evidence of anything untoward by President Obama or his team. And now that the economy has seen significant growth, unemployment has dropped to 6.3%, and ObamaCare has enrolled over eight million Americans, it must be time to opportunistically reprise the Benghazi affair. [And, by the way, the Daily Show is still mocking you]

Roger Ailes spent decades as a professional Republican consultant before being tapped by Rupert Murdoch to run Fox News. Ordinarily media executives do not interfere with the operations of their editorial departments, but such journalistic ethics have never been a part of the Fox News mission. Thus we see their CEO openly shaping news coverage, even influencing policy, and getting praised for it on the air by his employees.

This makes it all the more curious that Fox News is now feverishly chattering about a another White House email that allegedly discusses how the administration will respond to attacks by Fox News. Fox’s Catherine Herridge is aghast that such an email exists and that she can’t get her hands on it. 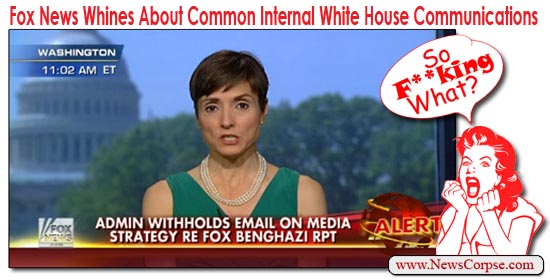 Setting aside the fact that every administration engages in media strategy, and that those discussions are legitimately confidential, Fox should be the network that is least surprised by this activity considering their aggressive attack posture with regard to this president.

When you have the CEO of a “news” network openly orchestrating negative coverage for a media enterprise that revels in anti-Obama hysteria, you cannot pretend to be surprised if the victims of those assaults choose to fight back from time to time.