Just one week ago, Jon Stewart exposed Sean Hannity for inserting video of a rally last summer to make a less successful rally this month look like it was well-attended. It was a blatant distortion that could not plausibly have happened by accident. Nevertheless, that is exactly the excuse Hannity coughed up, as he sought to trivialize the affair and sweep it under the rug. I wonder how Fox News will explain it this time.

ThinkProgress has caught them red-handed again. The video below was introduced by Fox anchor Gregg Jarrett saying…

“Sarah Palin continuing to draw huge crowds while she’s promoting her brand new book. Take a look at…these are some of the pictures just coming into us. You can see the lines earlier had formed this morning. There’s a crowd of folks.”

The problem is that this video clearly shows Palin at a campaign event last year, not a current stop on her book tour. McCain/Palin signs are plainly visible in the audience. But Jarrett’s commentary identifies these images as “just coming in.” It should also be noted that Jarrett is considered by Fox to be an actual “news” anchor, not a part of their editorial programming, like Hannity.

Following the takedown by Stewart, Fox and their apologists insisted it was an innocent mistake and that they had no intention of being deceptive. But how many times does this need to happen before their alibis are dismissed for the lies that they are? Real news enterprises do not misrepresent events to advance their agenda. You will notice that they have never made a mistake like this that increased the size of a Democratic rally. The dishonesty of Fox News seems to have no lower boundary. Before too long we should expect it to look something like this: 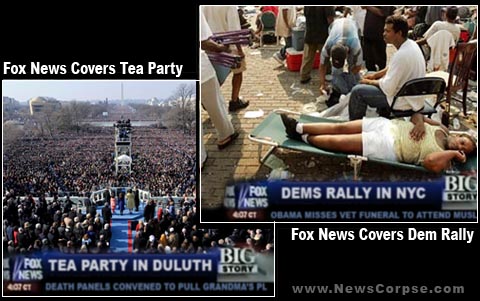 Update: Fox News has responded to this latest Faux pas by typically blaming a lowly editor:

“This was a production error in which the copy editor changed a script and didn’t alert the control room to update the video,” Michael Clemente, senior vice president of news at FOX, sad [sic] this evening. “There will be an on-air explanation during Happening Now on Thursday.”

That’s twice in two weeks. And on different programs. This is either intentional or a pattern of incompetence. Perhaps they should schedule a daily program to make their on-air explanations so they don’t have to interrupt their mistake-filled propaganda.