Sarah Palin’s book tour is sweeping across the nation. Thousands of Tea Baggers are enduring long lines and inclement weather for a chance to see their new heroine and get her signature on the book that was ghost written for her. However, not all of these appearances are going as planned. In Indiana, Palin left her supporters in the lurch. People who had purchased books and were issued wristbands assuring them a signature, ended up booing her and protesting as she departed. They should not have been surprised. One thing Palin is known for is quitting before her job is done.
—
This just in: Palin apologizes to Indiana fans:

I’ve been told that yesterday there were supporters in Noblesville who stood in long lines for hours in the cold and rain, and the book signing event ended without a chance to say hello to everyone who showed up. I am so sorry. We are working on a solution for those who were left behind. I apologize.

A solution for those left behind? I thought they were doomed.
—
The cover of Palin’s book says more about her than the 400 pages inside. The decision to title it “Going Rogue” could not be more revealing. First of all, let’s take a look at what “rogue” means:

Furthermore, the colloquially meaning of “going rogue” usually refers to an animal (elephant; GOP?) with an abnormally savage or unpredictable disposition. It may also refer to a person who is uncontrollable or out of the mainstream. Are these really the sort of positive representations that Palin intended?

It is also notable that the subtitle of her book is no more original on her part than the ghost written talking points and fabrications in the interior. I found fifteen other books subtitled “An American Life.” 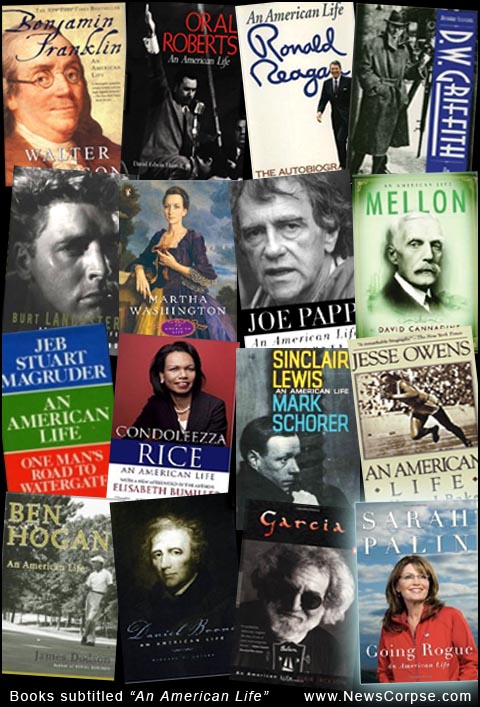 In that company, Palin seems a slight bit diminished. How exactly does serving half a term as governor and deep-sixing a presidential campaign translate into American icon status? For good or ill, everyone else listed above has undertaken something for which they will be remembered. I still can’t think of anything Palin has done that would be worth recalling – except for her contribution to the career of Tina Fey and other comedians. For that reason alone I am fervently hoping she runs in 2012, and taps Glenn Beck or Michael Steele as her number two.