The consequences of last week’s ruling by the Supreme Court are becoming more noticeable as corporations move to interpret and exploit the new environment for political engagement. Some surprising players are jumping into the game now that the restrictions from funding electoral activities have been removed. Take, for example, this press release from from Al Qaeda:

FOR IMMEDIATE RELEASE:
Parachinar, Pakistan, January 25, 2010, Al QaedAmerica, Inc.
The executive committee of Al Qaeda International (AQI) is enthusiastically supportive of the recent United States Supreme Court decision in the case of Citizens United vs. Federal Election Commission. In a narrowly argued case involving political advertising, the Court wisely expanded the scope of their deliberations and ruled 5 to 4 that almost all legal proscriptions on corporate spending on behalf of candidates and issue advocacy were null and void. The prohibition on direct corporate condtributions to candidates will remain in place, but virtually every other spending constraint has been struck down.

In light of this ruling, AQI is announcing the creation of a new corporation to be headquarted in Washington, D.C. USA. Al QaedAmerica will pursue the domestic interests of AQI and invest in businesses that are in accordance with our mission and reflect the broader principles of our worldwide campaign of terror. AQI’s chairman, Osama Bin Laden, appreciates the Court’s good judgment:

Bin Laden: By allowing corporations unlimited financial participation in American politics, the Court recognizes the role of business to impact the civil affairs of a nation. And businesses like ours are uniquely situated to take full advantage of this new expansion of rights in the areas of speech and elections.

The ruling actually gives corporations far greater sway over public management than individual citizens because of the superior ability of corporations to aggregate large sums of money and disburse it effectively to accommodating representatives. Domestic businesses as diverse as Halliburton and Wal-Mart are already planning how they will take advantage of the new freedoms afforded them by this ruling.

While it may not have been the intent of the Court, the ruling in no way inhibits corporations from outside of the U.S. to participate in the same manner as domestic corporations. This presents an attractive opportunity to AQI and many other disruptive enterprises who seek to exploit the American marketplace. Petroleum companies like Saudi Arabia’s Aramco and Venezuala’s Citgo, as well as defense contractors like Korea’s Daewoo and Russia’s Motovilikha, will have ufettered access to the American political system. Corporations around the globe now have the freedom to purchase their own congressmen and senators.All that’s required is a local office through which they can funnel millions of dollars into the pockets of the Great Satan’s political class.

AQI is moving forward aggressively to realize the benefits of this opportunity by establishing its new Al QaedAmerica division. With AQA we will be able to stay at the forefront of global jihad. We take pride in being the world’s premiere provider of senseless violence and murder, and this ruling will permit us to expand into exciting new territories and partnerships. Some examples of compatible business relationships and opportunities we are presently exploring include:

In the coming months, look for Al QaedAmerica to be a leader in the exploding market of exploding markets. Our new American division is already stockpiling cash to fund campaigns on behalf of gullible lackeys who will do our bidding. We are identifying initiatives that will enhance our world-class ability to generate fear. These operations are also profit centers as the fear fuels demand for security products in which we are also investing. 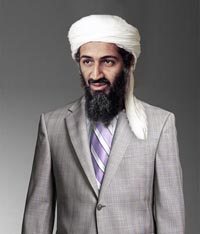 We would like to thank our partners in mongering. Glenn Beck of Fox News has been an invaluable ally as he promotes myths that elevate our status and increase the fear quotient upon which we rely to be successful. We are also appreciative of him and his colleagues at Fox for minimizing reporting on this Supreme Court decision, as too much publicity could result in attempts to legislatively supersede the Court. And we would not be where we are today without the help of conservative pundits and think tanks who put in long hours justifying decisions like the one just handed down. We expect the media in general will continue to ignore this decision because they stand to make billions in advertising from the newly unleashed corporations.

And, of course, former President Bush and Vice-President Cheney, who made this all possible by installing Justices John Roberts and Samuel Alito, have our enduring gratitude. Recent missions for martyrs have been extraiordinarily gratifying. And now that we, along with many other corporations, foreign and domestic, can manipulate the American government, the future for jihad looks even brighter.

The next couple of months (years?) it is going to be interesting watching the response from the global business community as they realize they can purchase legislators and legislation. That will be almost as interesting as watching the response from Congress as they struggle with the dilemma of restoring the integrity of America’s electoral system or letting the Court’s decision stand so they can profit from the billions of dollars in new contributions.