I have long anticipated the mental implosion of Glenn Beck. He is an obviously disturbed individual who seems to be constantly on the brink of a psychological collapse. But I always thought it would come in the form of an Apocalyptic dissent into a religio-political abyss. Instead, it came as he was supposed to be speaking on behalf of a sponsor for his radio show. In this ad for the Vermont Teddy Bear Company, Beck tells his listeners that he hates Mother’s Day and that it was a scam hatched by Woodrow Wilson. Check it out:

That was the intro to the spot for Vermont Teddy Bears. They must be pleased with how their ad dollars are being spent. In the radio business, advertisers pay extra for on air testimonials by the program host. Vermont Teddy Bear is sure getting their money’s worth.

Let’s face it…..The real reason Beck went off on this Mother’s Day sponsor is that these teddy bears come from the People’s Republic of Vermont. Beck considers Vermont a socialist mecca that should be cast out of the United States. It is, after all, the home state of the socialist Senator Bernie Sanders. And if that’s not bad enough, the teddy bear got it’s name from President Teddy Roosevelt. Beck thinks that Roosevelt and Wilson are progressives and that progressives are a cancer on America. 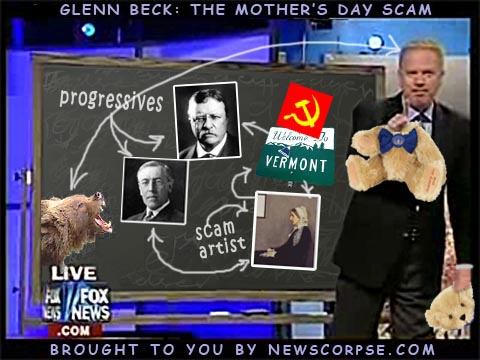 These subversive plush toys have to be taught a lesson. We can no longer sit by idly while they debase our mothers and indoctrinate our children with their fluffy Marxist plots. Thank God Beck is on alert to protect us from the evil of stuffed animals and to warn us of the dastardly schemes of “big businesses” like the International Vermont Teddy Bear Syndicate that controls the world economy. As long as he’s keeping watch, we don’t have to worry that small voices like his and the tiny media shop he works for, Fox News, will fade away.