For several years now, Fox News has been trying to vilify the word “progressive” by using it disparagingly and associating it with people or policies they regard negatively.

It started with Bill O’Reilly making repeated references to what he called secular progressives. These were the folks he accused of waging a war on Christmas and weakening family values. They are the reason he became a Culture Warrior.

More recently, Glenn Beck has mounted a full-on assault against progressives, whom he has called a cancer on America. Virtually every episode of his Acute Paranoia Revue makes reference to one or another of his imaginary progressive bogeymen – from the classics like Woodrow Wilson, to the modern like SEIU and, of course, President Obama himself. 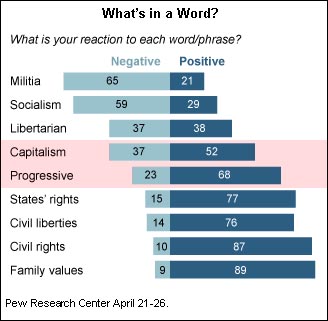 Despite all the firepower that Fox has devoted to this progressive bashing, America isn’t buying it. The Pew Research Center just released a study that asked respondents to say whether they had a positive or negative view of a variety of terms. About two thirds (68%) said that they have a positive reaction to the term “progressive.” That’s 16 percentage points higher than those who reacted positively to “capitalism.” Even a majority of Republicans (56%) have a positive impression of the curse of progress.

I wonder what Beck and O’Reilly would say if they were honest enough to even acknowledge that the survey exists. It would also be interesting to hear their response to the fact that 29% of Americans view “socialism” positively. On the not-particularly-surprising scale, 36% of Republican men like militias. That’s the highest favorable of any of the groups surveyed. It compares to just 21% of all respondents.

The bottom line is that Fox News may be exhausting themselves in their campaign to denigrate progressives and liberals and Democrats, but they are failing miserably as the nation proves to be smarter than the idiots at Fox had assumed. This is just their latest failure having previously been unable to thwart Democrats from taking control of Congress, winning the presidency, or passing health reform. So while they may make a lot of noise as they pump their propaganda into the atmosphere, they aren’t changing any minds. It’s rather comforting to know that instead of being effective and persuasive, they are just being annoying as hell. I can live with that.