The folks at Fox Nation are working overtime to unearth scandals they can attribute to Hillary Clinton. Lately their crack(head) reporters have discovered that, although Clinton did leave the White House in debt, she later made lots of money (Oh my!). They ferreted out that she is no longer young (You don’t say?). They alleged that she had suffered brain damage (Uh-oh!). And they continually try (and fail) to blame her for Benghazi. But now they may have hit on a charge that could stick: Hillary Clinton is an ethical attorney! (Yikes!) 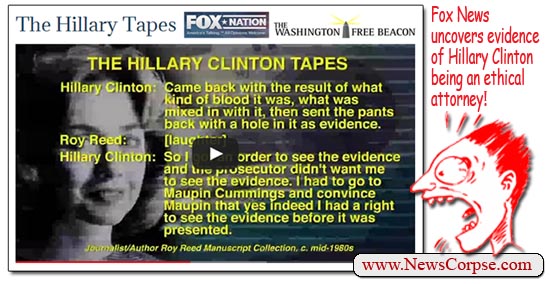 The Fox Nationalists posted an article that they sourced to the ultra-rightist Washington Free Beacon announcing the discovery of “The Hillary Tapes” from deep within the – well, the very public archives of the University of Arkansas, Fayetteville. The release of these tapes were intended to tarnish Clinton’s reputation as an advocate for abused women and children. The article began saying that…

“In 1975, the same year she married Bill, Hillary Clinton agreed to serve as the court-appointed attorney for Thomas Alfred Taylor, a 41-year-old accused of raping the child after luring her into a car.

“The recordings, which date from 1983-1987 and have never before been reported, include Clinton’s suggestion that she knew Taylor was guilty at the time. She says she used a legal technicality to plead her client, who faced 30 years to life in prison, down to a lesser charge.

“The full story of the Taylor defense calls into question Clinton’s narrative of her early years as a devoted women and children’s advocate in Arkansas—a narrative the 2016 presidential frontrunner continues to promote on her current book tour.”

Apparently the Fox Nationalists, and their ignorant pals at the Free Beacon, are unaware of the constitutional provision that grants all defendants the right to competent counsel. It is the responsibility of the attorney to work on behalf of the client’s best interests regardless of guilt or innocence. And in this case Clinton did just that after being assigned the case by the court. It would have been unethical to do anything else.

What’s more, the “technicality” that Clinton employed was that the lab contracted by the prosecutor had lost the material evidence in the case. That’s a pretty significant technicality. The defense can’t examine or rebut, nor can the state convict, on evidence that doesn’t exist.

So Clinton did her job as the law requires her to do. And for demonstrating those strong principles Fox tries to twist the story into something negative. Instead, they expose themselves as opponents of the Constitution and those who respect it. Descending to these depths of dishonesty in order to demean Clinton tells us something about Fox in the clearest terms: They are staggeringly scared of Clinton and the prospect of her candidacy in 2016.