On Friday the IRS reported to the House Ways and Means Committee that some email from the account of Lois Lerner, director of the Exempt Organizations division, were missing due to a computer crash that occurred in 2011. That morsel of news set the conservative media to salivating with hopes of a new controversy to wrap around the neck of the Obama administration. Never mind that after a year of congressional hearings, independent investigations, and media scrutiny, there has not been an iota of evidence tying any of the IRS activities to the White House, right-wing pundits and politicians scurried to spread innuendo and place blame.

Leading the pack, as usual, was Fox News. They pounced on the missing email story with a barely disguised glee, despite the fact that they had little information to report. However, they did succeed at what they do best: spewing outrage over alleged improprieties by President Obama that they cavalierly dismissed during the Bush years. 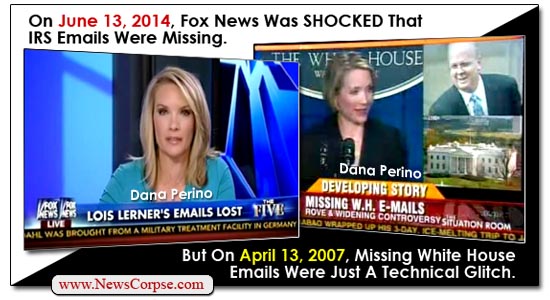 To be sure, it is reasonable to be concerned, even suspicious, when government agencies announce that data critical to ongoing investigations is unavailable. But when a media enterprise pretends to exhibit such concern for blatantly political purposes, it can hardly be regarded as credible. What’s missing in Fox’s reporting is the context that would put this story into perspective. Their reporting went straight for the jugular with premature conclusions of wrongdoing and dishonesty. The story was presented as an outrageous and unprecedented act of probable criminality.

Flashback to April of 2007. The Bush administration was in the midst of dual scandals regarding: 1) the outing of Valerie Plame, a covert CIA agent whose identity was deliberately compromised as payback for her husband’s criticism of the Bush lies that led to the invasion of Iraq, and 2) the unethical firing of eight federal attorneys for politically ideological reasons. Additionally, there were questions about Karl Rove improperly using a Republican National Committee e-mail account that the White House later said disappeared. While Congress was investigating these activities, the White House announced that two years of emails were lost and unavailable to the committees of jurisdiction.

Hmmm. Sound familiar? In fact, it is identical to the story now being pushed by Fox. However, Fox News never blew a gasket over the lost emails from the Bush administration. Dana Perino, a co-host of the Fox News program The Five, was among those expressing outrage on Friday when the news of the missing IRS emails was released. She and her fellow co-hosts lit into the topic, bemoaning the administration’s “ignorance” and “incompetence.” And without any proof whatsoever, they implied that the administration was lying and covering up.

What makes this even worse is that Perino was Bush’s press secretary when it was revealed that two years of White House emails were lost. This, of course, cannot be waived off as an isolated problem that occurred at another agency. This was the White House itself that lost emails that were presently being requested by investigators. And it was Perino who came to the defense. Here she is downplaying the matter in a report on CNN by Ed Henry (now at Fox News):

Here is Perino & Co. aghast at the revelation that IRS emails went astray:

It is astonishing that Perino could be so rattled by the IRS email report when she herself was so intimately involved in spinning an identical controversy when she worked for Bush (Of course at Fox, she’s still working for the same gang). Either she has the memory of a gnat or she is purposefully deceiving the gullible waifs who watch Fox News. And since deception is an integral part of the Fox News mission, we can safely assume it’s the latter.