What is it about the conservative mindset that needs to turn every contentious encounter into full scale warfare? It seems that no matter the subject, if there is some unresolved difference the affair must be escalated to combat mode. We see this with everything from the drug war, to the class war, to the annual lunacy of the War on Christmas.

The so-called “War on Terror” is just as ludicrous. It is impossible to declare war on a tactic, just as you cannot declare war on a group of narcotics or a feeling or the mole people who live beneath the Earth’s crust. Wars are carried out between nations that can be engaged militarily and concluded with definable resolutions. There is no opposing general who can surrender his sword at the end of a war on terror (or Christmas) and agree to conditions for peace.

Nevertheless, conservatives are insistent that war be waged on anything they dislike. They have a psychological predisposition that researchers have studied and documented. Some of these studies were discussed in an article on Salon by Paul Rosenberg who noted that…

“Conservative fears of nonexistent or overblown boogeymen — Saddam’s WMD, Shariah law, voter fraud, Obama’s radical anti-colonial mind-set, Benghazi, etc. — make it hard not to see conservatism’s prudent risk avoidance as having morphed into a state of near permanent paranoia, especially fueled by recurrent ‘moral panics,’ a sociological phenomenon in which a group of ‘social entrepreneurs’ whips up hysterical fears over a group of relatively powerless ‘folk devils’ who are supposedly threatening the whole social order.”

Today these right-wing paranoids are clamoring over whether President Obama should declare war on ISIL, a stateless assembly of militants who have no national identity or homeland. The notion that the United States should declare war on such a non-entity is absurd. That doesn’t mean that there shouldn’t be a concerted and decisive response to the brutal hostility of these terrorists. But it isn’t war. The politicians and pundits who are fixated on such a declaration are merely consumed with surface-level theatrics and partisan politics.

As evidence of their rank partisanship, Republicans are citing the murders of two American journalists as the justification for declaring war. However, there have been a lot more Americans killed by terrorists before this without a demand for such a declaration. What makes this different? Is it the manner in which the victims were killed? Or is it the person in the White House at the time? 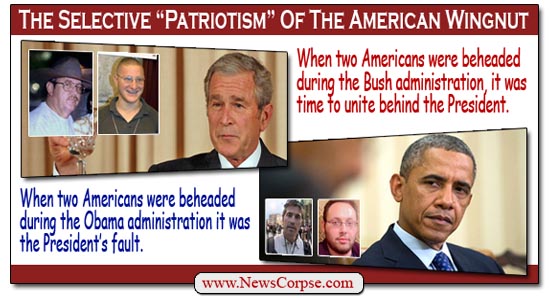 There is a distinct difference between the reactions by Republicans to terrorist activity during the Obama administration and during the administration of his predecessor, George W. Bush. When Bush was in charge there were also a couple of Americans who died in the same fashion as James Foley and Steven Sotloff. They were Nick Berg and Paul Johnson [Edit: Also Daniel Pearl]. After they were killed Republicans insisted that the country must rally around the President and unite against the terrorist enemy.

However, today the right-wingers are anything but united. They castigate Obama as being weak and indecisive. They even blame him outright for the deaths of innocents. Yesterday, Fox News host Andrea Tantaros told Bill O’Reilly that Obama “has a world view that is very anti-American.” O’Reilly didn’t disagree. Clearly there is a selective component to what the right calls patriotism. If a Republican is at the helm during a catastrophe he must receive our unquestioning support in the struggle against our foes. But no such loyalty is afforded a Democratic president. To the contrary, he is belittled and insulted and demeaned in the face of the enemy who, ironically, hold the same view of him as Republicans do.

It is notable that all of this vitriol comes at a time when Obama has achieved some significant victories over the terrorists. His policy of conducting airstrikes has resulted in pushing back ISIL from many of the cities they had bragged about capturing. We have regained control of the Mosul dam in Iraq. We have killed the leader of the Somali terrorist group that was responsible for murdering dozens of people in a Nairobi mall. And today there are reports that we have terminated both the right-hand man to ISIL leader Al-Baghdadi and his chief explosives expert. All of this has occurred while conservatives have baselessly complained that Obama hasn’t been doing anything at all.

I’ve noted before that by denigrating the President at times like these it has the effect of emboldening the enemy by creating a false and dangerous impression of Obama as a weakling that they can easily overcome. It almost seems that that is their objective, so that a terrorist attack on U.S. soil will take place that they can blame on Obama. Whatever their purpose, it is plain that they apply one standard of judgment for Republicans and another dangerously negative one for Democrats. And above all they have resolved to put their cynical, dishonest politics ahead of the welfare of the country. And they call that patriotism.

12 thoughts on “We Are NOT At War: The Right-Wing Obsession To Declare Their Delusions”