Much is being made of an off-hand sentence fragment taken from President Obama’s press conference yesterday. In response to a question from Chuck Todd about whether he needed Congress’s approval to go into Syria, Obama said…

“I don’t want to put the cart before the horse. We don’t have a strategy yet. I think what I’ve seen in some of the news reports suggests that folks are getting a little further ahead of where we’re at than we currently are. And I think that’s not just my assessment, but the assessment of our military as well. We need to make sure that we’ve got clear plans, that we’re developing them. At that point, I will consult with Congress and make sure that their voices are heard.”

Clearly the President was trying to temper speculation in the media that has been rampant with predictions of a U.S. military assault on Syria. That is not the sort of thing that commanders want to be circulating prior to the launch of a mission. So Obama prudently dismissed the gossip and focused on presenting a united front that included the White House, the Pentagon, and Congress. However, conservative politicians and pundits have a different theory that has two primary principles: 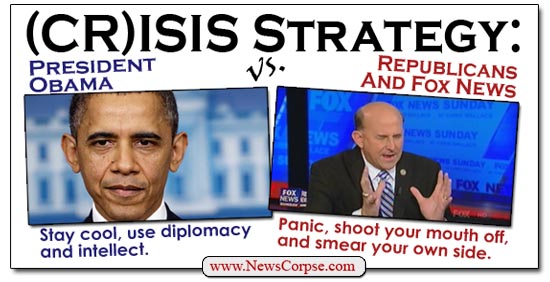 While the President is working to keep from showing our hand, those on the right are clamoring for him to spill every secret plot that is currently under consideration. They are outraged that Obama has not told the world, and ISIS, what our strategy is for dealing with ISIS in Syria. Certainly ISIS would like to know what we are planning, and Republicans are helping them in that effort.

An example this morning on the Fox News program Outnumbered had guest co-host Pete Hegseth, head of the Koch brothers front group Concerned Veterans for America, saying that “The number one rule in war is that if there is no strategy, don’t tell the enemy that.” Hegseth never mentioned what boneheaded rule book he was referring to, but it is one that contradicts the long-respected wisdom of Sun Tzu whose “The Art of War” advises to “Appear weak when you are strong, and strong when you are weak.” In other words, it is strategically advantageous to fool your enemies into thinking that you have no strategy. To announce your strategy would only allow them to reinforce their defenses against it.

After advocating divulging our plans, the right goes on to tell our enemies that they have little to worry about because our leadership is incompetent and may even be on their side. For some reason they think that it’s helpful to let ISIS know that some of Obama’s own countrymen have no confidence in him. Fox News host Kimberly Guilfoyle fantasized about having Vladimir Putin as president for forty-eight hours instead of Obama because, I guess, brutal dictators are always preferable in the eyes of the right. Perhaps they are preparing for 2016: 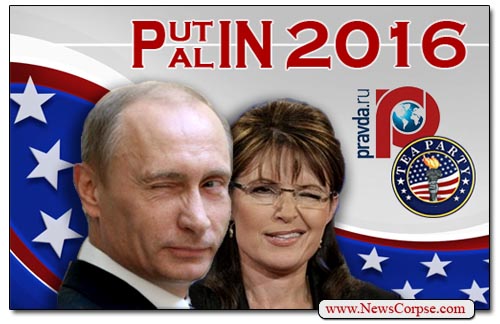 GOP representative Louie Gohmert made an ass of himself (again) by likening Obama to Barney Fife, the bumbling deputy on the old Andy Griffith Show. The problem with that analogy is that Gohmert and the right are more like Fife than Obama. Remember that Fife was the hothead who was constantly itching for a fight and the opportunity to put his one bullet in his pistol. He couldn’t wait to confront the bad guys with deadly force whether or not a real threat existed. Doesn’t that sound like Bush’s adventures in Iraq, and what conservatives are doing right now? Certainly the right wouldn’t approve of Andy Griffith’s Sheriff Taylor, who was well known for being deliberative and resolving problems with diplomacy and intellect. Kind of like President Obama. In fact, Sheriff Taylor was so notorious for his resistance to unnecessary conflict that one episode featured a story line where Mayberry’s Sheriff was wooed by producers from Hollywood to make a movie titled “Sheriff Without A Gun.”

But the problem that the wingnuts are causing is far more serious than asinine analogies. Their criticisms have the dual risk of pressuring the President to divulge sensitive military plans, and emboldening the enemy by creating a false and dangerous impression of Obama as a weakling that they can easily overcome. How is that an expression of patriotism? Let’s face it, the right is more concerned with demonizing the President than they are with defeating ISIS, or with the welfare of our troops, or with national security in general. They are even more concerned with the color of his suit or whether he wears a tie. Gawd bless Amurca.