When Glenn Beck lost his perch on Fox News three years ago, his public profile shrunk considerably. He was no longer seen by a million addled viewers every day who clung worshipfully to his every utterance of apocalyptic doom. Yet he soldiered on promising to become “a thousand times more powerful” in whatever new venture he undertook. That was a promise he has not been able to keep.

As a result, he has resorted to literally begging his audience to subscribe to his Internet webcast, reaching out to investors he once swore off as limiting his free expression, and prostrating himself to the television gods hoping to regain access to their domain. It gives the title of his 2010 book a whole new meaning as to whether Beck himself is going broke. 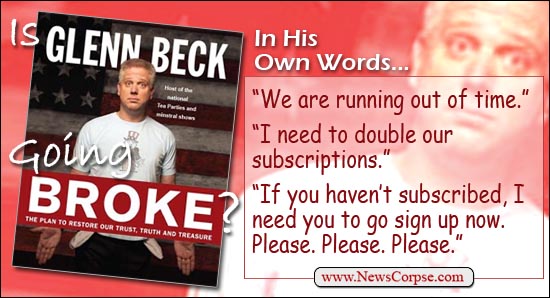 Beck’s recent confessional regarding his health problems has stirred a great deal of controversy from skeptics who regard the performance as a cynical ploy for attention and revenue enhancement. News Corpse addressed that skepticism with the observation that Beck had conveniently healed himself at the same time he announced the mystery malady. However, he also confirmed that throughout much of the time he was accused of saying crazy things he actually was (is?) crazy.

Enter Fox News to clean up the mess Beck created and put it all in a glowing light of blessed prosperity. Fox’s whoring media analyst, Howard Kurtz, brought in conservative shill Joe Concha to polish the story. Concha began by lionizing the woefully ailing Beck as a brave figure who is leading the “the humanization of opinion journalism” (whatever that means). He added that…

“Guys like [Mark] Levin, and [Rush] Limbaugh, and Glenn Beck – they’re humanizing this whole process as well. Think about what Glenn said when he made that statement. He said ‘You know what? This isn’t meant for the press. This is between you and me.'”

Note to Joe Concha: When someone posts a two hour video monologue, seated next to a long-suffering wife, while sobbing and praising God for a miraculous healing, that is not a personal message to a private audience. And if you think that Beck was not aware of the interest in this campy melodrama among members of the tabloid press, you really should get out of the media business.

Concha continued his defense of Beck by taking a cowardly swipe at Cenk Uygur, who he called “a former MSNBC host screaming to be relevant again,” but whose name he could not utter. Ironically, if anyone is screaming to be relevant again it’s Beck, but that was beyond Concha’s ability to comprehend. Instead, he criticized Uygur’s assertion that Beck was hyping a dubious illness in order to get back on television and make more money. Then Concha rattled off a list of mostly unverified accounts of Beck’s wealth. He sought to belittle Beck’s critics by smugly declaring that “Anybody who says he’s going bankrupt and he made up this whole thing because he doesn’t have a couple of dollars in his pocket doesn’t live in a reality that has Google, a calculator, and basic logic.” To which an obviously enchanted Kurtz responded “Alright, you’ve settled that question,” which, of course, he had not done.

To the contrary, it is Concha who has abandoned both logic and any understanding of basic economics. What’s missing from his Beck-fluffing analysis is that income is not the sole determinative component of net worth. You also need to factor in spending and debt. And by Beck’s own account he was bleeding money and needed to be rescued by either his loyal disciples, outside investors, or a return to television.

Beck has wailed plaintively in the recent past that “Already I’ve lost quite a tidy sum.” As a result he was forced to beg his disciples to increase his subscription base because “I thought I had time. I need your help.” That doesn’t sound like a healthy business enterprise. To be sure, he has spent heavily on a new television studio in the suburbs of Dallas. And he is allegedly bankrolling a film studio modeled after the Walt Disney organization, complete with high tech animation and effects facilities. He is also running retail businesses and stage presentations and publishing imprints. All of these activities have costs associated with them.

Beck does not disclose financial statements for himself or his businesses, so there is no way of knowing whether the mega-bucks he is reported to be pulling in cover his expenses. However, the debt he is compiling may be what led to his filing with the SEC seeking $40 million in funding for TheBlaze (As of 7/1/2014 he had only $6.4 million). This comes after he previously vowed to abstain from outside investors saying that…

Apparently he wants them now. He also wants back on TV. He has been working furiously to get cable operators to carry his video blog. That in itself is an admission that the web business is failing. If he does get the cable carriage he longs for, that programming will be available for free to all of the current cable subscribers on the system. So why would anyone pay for the web programming? If the Internet subscription model was working for him, Beck wouldn’t risk cannibalizing his online customers by offering the same content for free on cable.

It’s clear that the hacks on Fox News haven’t taken these factors into consideration. Consequently, they mouth off on subjects about which they are totally ignorant. But then that’s how they got their jobs at Fox in the first place. Being ignorant, or at least willing to lie with a straight face, is a prerequisite for employment at Fox News. What else could explain Sean Hannity, Steve Doocy, Gretchen Carlson, Keith Ablow, and, of course, Joe Concha and Howard Kurtz?