Here is a typical demonstration of how Fox News purposefully distorts statements from White House spokespersons in order to slander President Obama. 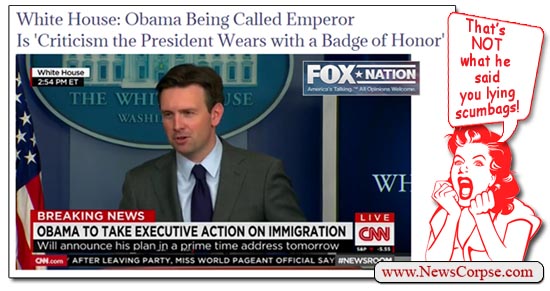 Press Secretary Josh Earnest responded to a loaded question during yesterday’s daily press briefing (video below). The question rested on a premise attributed to GOP House Speaker John Boehner accusing the President of “governing with lawlessness” if he proceeded with an executive action addressing immigration.

Let’s set aside for the moment the fact the President is acting wholly within the law as affirmed by legal experts across the political spectrum. In the process of reporting this exchange, Fox News posted an item on their community website Fox Nation that relied on an account from the uber-rightist Washington Free Beacon that badly mischaracterized Earnest’s answer. The headline that adorned the top of the article read “White House: Obama Being Called Emperor Is ‘Criticism the President Wears with a Badge of Honor'”

Suffice to say that this is not remotely what Earnest said. But to make matters worse, the Fox Nationalists badly transcribed Earnest’s remarks to fit their bogus portrayal. They wrote…

“We heard rhetoric for some time. Their most recent statement referred to ‘Emperor Obama.’ The fact is the president is somebody who is willing to examine the law, review the law and use every element of that law to make progress for the American people and that’s a criticism the president wears with badge of honor.”

For the record, here is what Earnest actually said with the relevant excisions by Fox in bold:

“We heard [this kind of] rhetoric [about lawlessness from the House Republicans] for some time. I know that Their most recent statement referred to ‘Emperor Obama.’ The fact of the matter is the president is somebody who is willing to examine the law, review the law and use every element of that law to make progress for the American people and [if that is something that Republicans are critical of then] that’s maybe a criticism the president wears with badge of honor.”

An objective reading of that statement shows that Earnest was not referring to the pejorative “emperor” as the subject of his “badge of honor” remark. He was plainly referring to the criticism of Obama as being determined to “make progress for the American people.” Indeed, that is an honorable pursuit and one that Republicans abhor. So they have to invent a connection that grievously contorts the language in order to cast the President as the tyrant they so often accuse him of being.

For Fox News to publish this brazenly distorted transcript of remarks that are easily verified on video illustrates just how shamelessly they are devoted to false representations of the truth. It’s more evidence that anything Fox News reports has to be carefully vetted before accepting as fact. Indeed, it’s probably safer to assume that Fox “News” reports are false until proven otherwise.

For more examples of blatant lies from Fox…
Get Fox Nation vs. Reality. Available now at Amazon.

16 thoughts on “Fox Nation vs. Reality: Inventing The “Emperor Obama” Badge Of Honor”