You really have to wonder whose side these cretins are on. When Fox News turns to one of their many retired military officers (turned wingnut pundits) for some insight into the war on terror, they frequently call Lt. Colonel Ralph Peters (whose name translates to “vomiting penises” in Slanglish). 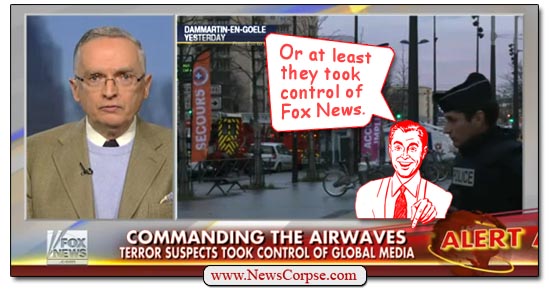 Peters is a particularly disgusting choice for commentary about the heinous assault on French publishers considering that Peters has advocated for censorship and, worse, military strikes on U.S. media. A few years ago he said that…

“Rejecting the god of their fathers, the neo-pagans who dominate the media serve as lackeys at the terrorists’ bloody altar. […] Although it seems unthinkable now, future wars may require censorship, news blackouts and, ultimately, military attacks on the partisan media.”

Nevertheless, Fox News recruited him again to spew his repugnant views on the tragic murders of the staff of the satirical Charlie Hebdo newspaper in Paris. And the primary theme of his analysis is that the terrorists won.

“The terrorists scored yet another terrific victory by taking the entire global media hostage for, not only two and a half days, but we’re still their hostage. We’re still talking about it this morning.”

The notion that the terrorists were victorious due to the fact that they succeeded in killing some innocent people is a tribute that only a deranged Foxoid could concoct. This act of mindless brutality did not advance any goal of the terrorists, much less provide a victory by any definition. In fact, it incited Muslims around the world to repudiate the killers, including the governments of Saudi Arabia, Malaysia, Egypt, Iran, and many more. There has never been more agreement between Muslim nations and the West than there is today, at least with regard to the activities of a few extremist jihadis.

What’s more, Peters made a fool of himself by criticizing the media for reporting these events, even as he was rambling on about them incoherently. It takes a special kind of stupid to castigate people for continuing to talk about it while he was still talking about it. And he went to portray the coverage of this major international news story as PR for the terrorists:

“We have to cover the news. We must discuss it. but they leveraged us, they judo’ed us into being, pro-bono, the greatest PR firm in history for terror.”

Of course, It was Peters himself who was providing the positive PR with his declaration that the terrorists had won. The bad guys must have loved that judgment being broadcast on American television by a former Army officer. Most of the rest of the press condemned the perpetrators and showered sympathy on the victims. But for Peters and Fox every opportunity to demean President Obama (and consequently, the American military’s response to terrorism) is too good to pass up. And so we get more of this kind of ranting:

“We’ve never tried the basic thing you do in war, which is killing your enemy in large numbers and continue to kill them until they quit. […] President Obama uses drones to kill terrorists. That’s great, except that he only kills the people he doesn’t want to have to send to Guantanamo.”

Setting aside the fact that Peters directly contradicts himself in those remarks, he seems to be implying that the terrorists killed by drones would have otherwise been collected and transported to Guantanamo. That’s just plain idiotic. Is Peters suggesting that Obama should have sent soldiers into harms way to capture the terrorists? The one thing that we can be certain of is that Peters loves the fact that the drones produce civilian casualties. He comes right out and says so.

“Get the lawyers out of the fight. Accept that there is collateral damage in war. You don’t apologize for it. […] You leave behind smoking ruins and screaming widows.”

This isn’t the first time that Peters has praised the loss of innocent lives. In the same article referenced above he lamented that America’s tolerance for “acceptable casualties – hostile, civilian and our own – continue to narrow fatefully.” Note that he includes in his lament that America is too concerned about even “our own” casualties. Peters then went on to laud the “greatest generation” of World War II veterans for firebombing Germany and killing soldiers and their families. He also praised the dropping of atomic bombs on Japan, which killed tens of thousands of civilian men, women, and children.

This man is a sociopathic maniac with a lust for blood – even that of Americans. And the fact that Fox News repeatedly invites him on the air to articulate that message of hate and genocide is a lot worse than their typical unfair and unbalanced political propaganda. It is an admission that the editors and executives at Fox agree with him and have the same hostility for the values that most Americans hold dear.