The murders of the staff of satirical newspaper Charlie Hebdo in Paris are universally regarded as a heinous assault on humanity and free expression. Virtually every public commentary on the crime repudiates the killers and the violently extremist ideology they claim to represent. That includes the prominent Muslim advocacy organizations like the Council on American-Islamic Relations, and the major Islamic governments of Saudi Arabia, Malaysia, Egypt, Iran, and more.

Yet even as this international chorus of condemnation resounds throughout the world, there are some petty voices in the media that seek to take political advantage of the situation. One of the tactics they employ is to attempt to cast shame on any media enterprise that fails to publish the offensive images that are reputed to have incited the attack on Charlie Hebdo. Many conservatives are calling anyone who doesn’t repost the images cowards and terrorist appeasers.

Why is the willingness to give more attention to a specific example of insulting imagery a test of dedication to a free press? Certainly the right to publish such material is one that must not be infringed in a free society, but that doesn’t make it a requirement for everyone to do so. It is possible to protest censorship, intimidation, and terrorism aimed at free speech without engaging in the same speech.

For instance, conservative extremists like Ted Cruz have every right to compare supporters of ObamaCare to Nazis, as he did on the Senate floor. But that doesn’t mean that in order to uphold his rights I have to stand up in public and make the same asinine comparison. It is quite enough for me to articulate my opinion that he is free to say whatever idiotic and inflammatory bullcrap he wants.

The problem is that there is an ugly underpinning to the calls by the right to post offensive images of Mohammed everywhere. And that is that they get off on it. They are only too happy to malign the prophet of a religion that they hate and regard as an evil enemy. Never mind that, by far, most Muslims are as appalled by the Paris murders as everyone else. The rightist, Christian martinets of virtue won’t be happy until every magazine, newspaper and television program has featured the images on their front pages and at the top of every broadcast.

It goes without saying (though I’ll say it anyway) that these same defenders of freedom would never insist on such widespread reproduction if the images maligned their sainted Ronald Reagan. Can you imagine Todd Starnes of Fox News calling out the cowards in the media for not prominently displaying an offensive picture of Reagan? Of course not. But that’s what he did to those not displaying the Mohammed cartoons.

A few years ago there was a movie about a fictionalized assassination of President Bush. It wasn’t even a political film, but rather a crime drama that delved into the complexities of an investigation into the killing of a president. Conservatives were apoplectic, complaining about the film and demanding that it be pulled from distribution. CNN and NPR refused to air advertisements for it.

The Dixie Chicks had the temerity to exercise their rights to free speech by saying merely that they were ashamed that Bush was from Texas. That rather tame bit of criticism led to record burnings, concert boycotts, and even death threats. No one was demanding that everybody play their music on the radio to demonstrate a commitment to free speech.

And then there was the notorious parody ad that appeared in Larry Flynt’s Hustler Magazine. It was a mock ad for Compari that played off of the liquor’s ad campaign at the time. However, Hustler’s version put televangelist Jerry Falwell in, shall we say, a compromising position. The response to that was both outrage from offended Christians and a lawsuit from Falwell. Eventually, Flynt prevailed in the Supreme Court, scoring a victory for free speech. But none of the conservatives today who are so anxious to see more public displays of Mohammed cartoons were clamoring for such a movement of solidarity in defense of Flynt. And it should not be forgotten that Flynt was also the victim of a terrorist attack when he was shot by a white supremacist, severing his spinal cord and leaving him confined to a wheelchair. 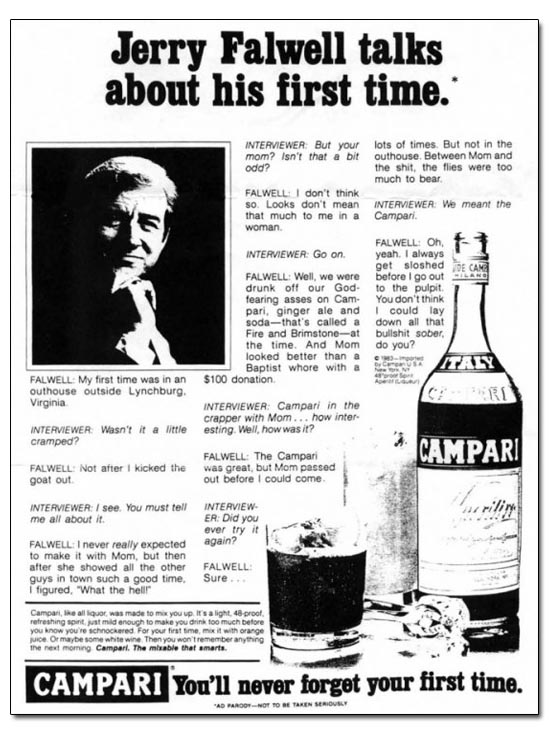 What is painfully clear is that conservatives would never condone reproducing images, or promoting other forms of speech, that they find offensive. But they are drooling ravenously to see more of the images that offend Muslims. And it’s all in the name of defending free expression. But beyond the obvious hypocrisy, it is apparent that they are more interested in satisfying their own repugnant desires to denigrate their perceived foes than in standing up for freedom.

[Addendum] As an example of some of the intrepid Fox News soldiers of press freedom, these statements were recently broadcast:

Ralph Peters: The correct response to this attack by all of us in journalism – we pretend to be so brave. If we had guts those cartoons would be reprinted on the cover pages of the New York Times, the Wall Street Journal, the L.A. Times, the Washington Post tomorrow. They won’t be. We’ll cry, but we’ll continue to self-censor.

Note that the official position of Fox News is to not display the images from Charlie Hebdo. They issued a statement saying that “The safety of its correspondents and questions of taste are at issue.” So apparently, free speech is already lost. But if they are still interested in publishing images to demonstrate their solidarity with oppressed journalists, maybe they will publish this image of a cardinal giving Jesus a blow job on the cross. It was featured on the cover of the German satire magazine, Titanic, who have encountered their own problems with censorship and could use the support. 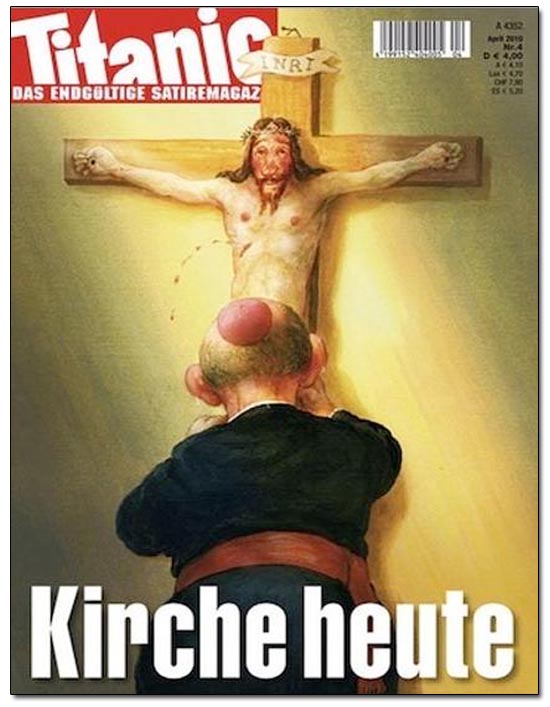