The nightmare of Armageddon is becoming more real every day as the signs continue to reveal that we are inhabiting the End Times forecast by the Biblical prophets of talk radio. Death and destruction are looming just over the horizon according to God’s messenger on the InterTubes, the Reverend Glenn Beck. Just this week he delivered a sermon predicting the start of World War III that will bring the darkness to all mankind.

And if that’s not bad enough, now the National Rifle Association is in danger of being overrun by radical Islamists bent on destroying America from within. The evidence of this peril was brought into the light by Beck yesterday (video below) during an interview with renowned Islamophobe and conspiracy kook Frank Gaffney who pulled aside the burka of anti-tax crusader Grover Norquist to expose him as the secret engineer of “influence operations on behalf of enemies of this country.” 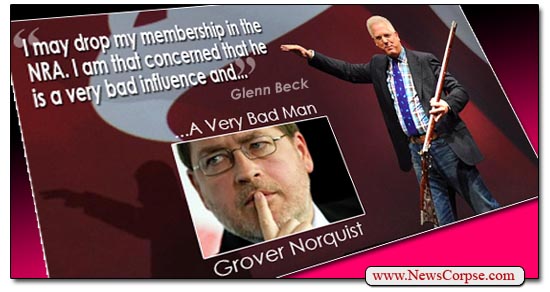 For those unfamiliar with Norquist, he is the president of Americans for Tax Reform, a rightist organization that opposes all tax increases and pressures weak politicians to sign his “no tax pledge.” Norquist has been a conservative staple for decades and is closely associated with the Republican Party. He is currently seeking reelection to the board of directors of the NRA.

So obviously he is a subversive agent of the Muslim Brotherhood as charged by Gaffney and Beck. These charges are based on incontrovertible evidence of his fraternization with our terrorist foes. Specifically, there are two facts from which he cannot hide. First, he is married to Muslim woman, which only a terrorist would do. And second, he has a beard.

If you think that facial hair is a foolish indicator of terrorist sympathies, note that it has been previously cited by the former chair of the Texas Republican Party as proof of a conversion to Islam. Similarly, the father of a captured American soldier was accused of the same thing when he abstained from shaving while his son was in captivity. However, the Duck Dynasty Klan has somehow managed to avoid being linked to Al Qaeda despite their hairy mugs. 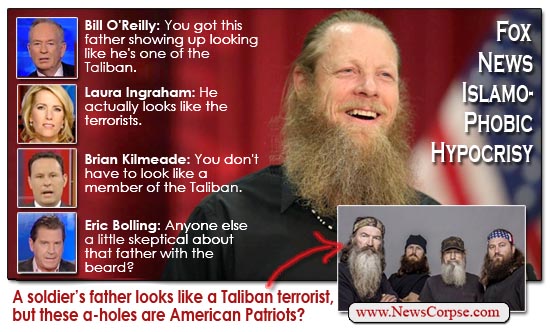 As for Beck, he proudly states that he is a lifetime member of the NRA. He has spoken at their annual conferences where he once featured a picture of Michael Bloomberg, a gun safety advocate and the Jewish Mayor of New York City, giving a Nazi salute. But now Beck’s consternation about Norquist’s treasonous ambitions has boiled over as he declared that any organization that countenanced such a turncoat could not count on Beck’s support. He said that…

“I am not an expert on Grover Norquist by any stretch of the imagination, but I have heard enough that makes me concerned enough that – and, I hope the leadership of the NRA hears this, and every member of the NRA hears this – that if this man is elected, or re-elected and confirmed on the board of the NRA, I may drop my membership in the NRA. I am that concerned that he is a very bad influence and a very bad man, that if this is who the NRA decides to put on their board of directors, I don’t think I can be associated with them.”

Indeed. How can anyone of good conscience align themselves with bearded spouses of Muslim vixens? The NRA has an obligation to only form relationships with upstanding citizens like board member Ted Nugent, whose only shortcomings are his hateful bigotry and overtly hostile threats to his political foes, including that sub-human mongrel (Nugent’s words), President Obama. Subsequent to his rant, Beck says that the NRA has promised him that they will “get to the bottom of this once and for all” by conducting a thorough ethics investigation into Norquist. It’s about time.

Norquist’s wife is every bit as frightening as Hilary Clinton’s long-time aide Huma Abedin, who has also been fingered by wingnuts as a covert agent of our enemies. The prospect of Clinton assuming the presidency and Norquist’s infiltration of the NRA should be cause for all Americans to rise up. The danger is metastasizing throughout our government. Nearly all of the Republicans in Congress have signed Norquist’s pledge, including House Speaker John Boehner, Senate Republican Leader Mitch McConnell, and all of the GOP senators currently exploring presidential campaigns (Rand Paul, Ted Cruz, Lindsey Graham, and Marco Rubio). Exactly what does that obligate them to do on behalf of the worldwide radical Muslim movement?

Clearly Norquist’s influence is growing. Patriots need to establish what that means for our future as a free republic. And Beck is once again leading the way by refusing to accept the NRA’s tolerance for terrorist board members. Beck, as he likes to remind us, has been right about everything he has ever said. For instance, the stock market has crashed, oil prices have skyrocketed, ObamaCare destroyed the economy and left millions sick or dead, the dollar is worthless while gold is soaring, and Obama’s support for the worldwide Caliphate has achieved its goal.

Oh, wait a minute. None of those things are true. But if you close your mind to reality you can imagine that Beck’s prophesies have all come to pass and live in the dystopian paradise that he has fabricated in his demented, cartoon brain. Guns will be abundant, corporations will be free to poison our environment and elections, and no one will suffer from the pain of having health insurance. Wouldn’t that be Heavenly?