Todd Starnes has a unique role at Fox News as the protector of the heritage of white Christians. Most of his “dispatches” are about some imagined discrimination against this powerless majority. However, they are also mostly bogus fantasies that are later debunked by real journalists. In one case, Starnes hyped a fake story that was planted by the publisher of his new book. 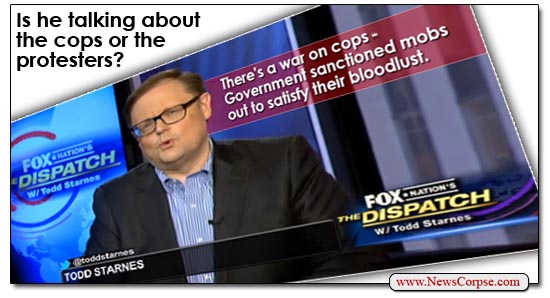 In his latest harangue, Starnes is aghast that President Obama didn’t clear his busy schedule to visit the two injured police officers in Ferguson, Missouri. His brief sermonette titled “Gov’t-Sanctioned Mobs Lay Siege to Ferguson While Obama Jets Off to Hollywood,” is crammed with viciousness and vituperative insults. The best way to demonstrate the idiocy and ignorance of this screed is to let it speak for itself. So here is every word of it with commentary:

Starnes: Whether they admit it or not, the protesters in Ferguson, Missouri got what they wanted this week. Two police officers ambushed.

This overtly racist opening line is evidence of a severe mental impairment. Starnes’ unsupported assertion that peaceful protesters wanted officers to get shot is the sort of bigotry that is generally seen in dispatches from the Ku Klux Klan.

Starnes: Blue Blood spilled on the streets, the latest casualties in a government-sanctioned war on law enforcement.

How dramatic. You have to wonder if Starnes is aware that “blue blood” usually refers to the upper-class elites that police are often shown to be protecting to the exclusion of every other citizen. And the “government-sanctioned” quip is utterly delusional. He doesn’t bother to identify the agency that is sanctioning this imaginary war on law enforcement.

Starnes: At some point you have to wonder when the police are just going say, “You know what folks? Just patrol your own blasted streets.”

Of course. Because that’s what all good police officers say who have encountered the risks associated with their jobs. What Starnes fails to grasp is that cops have been targets of criminal types since the beginning of policing. It’s a good thing that most officers have more dedication and integrity than cowards like Starnes.

Starnes: For months now, the White House has used Ferguson to advance a false narrative about racism in America. “Hands Up, Don’t Shoot” — a lie. A bald-faced lie.

Actually, the White House has never uttered the words “Hands Up, Don’t Shoot” much less advanced any narrative associated with it. Starnes is apparently unaware that it was the Obama Justice Department that found insufficient evidence to press charges against officer Darrel Wilson. But Starnes is equally unaware that the narrative of racism in America is not “false.” That fact was also in the Justice Department’s report, along with documented proof.

Starnes: Instead jetting off to Ferguson on Air Force One to console the officers and deliver a pro-law enforcement speech, President Obama flew right over Ferguson on his way to Hollywood, where he made a case for moral equivalency on “Jimmy Kimmel Live!”

Actually, Obama made a case for the rule of law and respect for law enforcement when he said that “there was no excuse for criminal acts.” He called for the arrest of the perpetrators and the marginalization of “people who resort to violence.” And by doing it with Jimmy Kimmel he reached a much larger audience with that message.

Starnes: He also tweeted: “Violence against police is unacceptable. Our prayers are with the officers in MO. Path to justice is one all of us must travel together. – bo” With all due respect, Mr. President – that’s a bunch of BS.

This is a perfect example of how Obama cannot win with blockhead partisans like Starnes. Even when he makes exactly the sort of statement that is appropriate for the circumstances, they will simply dismiss it and resume insulting him.

Starnes: There’s a war on cops – government-sanctioned mobs out to satisfy their bloodlust. And that’s all you’ve got? A hundred forty characters and a late-night punchline?

First of all, that aint all he’s got, it’s just all you heard. Starnes conveniently filters out anything that doesn’t fit his hateful biases. Secondly, Starnes should be more careful with his rhetoric. Parsing his closing sentence would suggest that he is defining cops as “government-sanctioned mobs.” Ironically, that’s just how some people in minority communities see them when they are discriminated against and mistreated as numerous studies have shown occurs with unfortunate frequency.

The saddest part of this is that it is just another chapter in the ongoing parade of bigoted commentaries from Fox News and other rightist media. They have an obsession with castigating minorities, denying racism, and lecturing the victims of their hate as to how they should respond when mistreated (aka “whitesplaining”). And by pretending that problems don’t exist, and lying to their audience, Fox News et al are only making the problems worse.