Affirming the predictability of the Fox News brand of hack journalism, the network moved quickly to make sure that their viewers were misinformed about a tragic incident in Ferguson, Missouri last night. 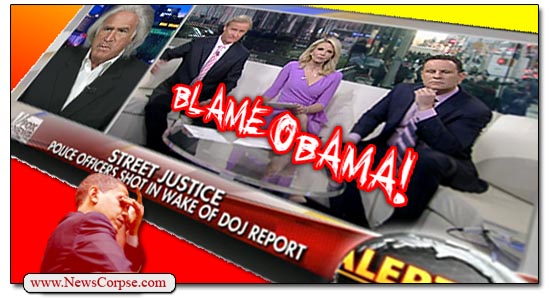 As a gathering of protesters was winding down in Ferguson, shots rang out that resulted in injuries to two police officers. By morning the officers were released from the hospital and are expected to make full recoveries. Also by morning, Fox News aired multiple reports of the incident placing responsibility for the assaults squarely on the perpetrators whom Fox identified as President Obama and Attorney General Eric Holder.

Setting aside all of the known facts, Fox News sought to disparage the usual objects of their animus. It didn’t matter to them that the authorities in Ferguson had not tied the shootings to the protesters at all. Fox News made the leap from the protesters to the administration in record time. Their slanders were in direct contradiction to public statements by the chief of the St. Louis County Police, Jon Belmar, who the Washington Post reported as saying that…

“[T]hree or four shots were fired from across the street from where about 75 protesters and 40 police officers were gathered. He said that the shots did not come from the group of protesters who were gathered near the police station.”

Nevertheless, Fox twisted their coverage to point the blame toward government officials hundreds of miles away. The defamation began with the all-white Kurvy Kouch Potatoes at Fox & Friends as the story was still unfolding.

Elisabeth Hasselbeck: He [Holder] chose to grandstand. And now – fuel on the fire – less than a week later, we are seeing the dots connecting here.
Fox News legal analyst Bob Massi: When you say that you’re going to dismantle a police department if they don’t fix it, it incites race relations — it incites riots.

Hasselbeck’s delusional dot-connecting exercise aims to associate the shootings with the Department of Justice report finding that the Ferguson police department had engaged in a pattern and practice of discrimination against African-Americans. She, along with the rest of the right-wing media choir, would prefer that this racist and unconstitutional behavior was merely ignored and swept under the rug. But the notion that avoiding honest appraisals of police conduct would serve any positive purpose is one that only racist enablers and sympathizers could accept. In the real world, such avoidance would be recognized as a prelude to civil unrest.

Likewise, Massi utterly mangles logic by asserting that promises to take corrective action would incite riots. It is the complete opposite of reality. When officials undertake initiatives that address the complaints of the people, the people are generally satisfied and far less likely to erupt in violence. Massi’s conclusion is so absurd it defies comprehension.

Which takes us to Fox’s Outnumbered, where guest Lou Dobbs joined the program’s regulars to continue the condemnation of leaders in Washington:

Dobbs: I think that, plainly, there are so many forces at work here. So many people who deserve considerable blame for fomenting an environment like this in which this could occur. Chief among those, in my opinion, are the President of the United States and the Attorney General.
Tantaros: They intervened and they flamed the racial tensions. And Eric Holder has proven time again he is an Attorney General for the criminal, by the criminal, and of the criminals in the United States of America. […] You think it’s a coinicidence that two cops got shot last night? This was inflamed because of what this administration did. This specific incident.

Republicans used to define themselves as the party of responsibility. However, when they have the opportunity to hold wrongdoers accountable, they decline and instead shift blame to their ideological enemies, letting the real perpetrators off the hook. In the process they viciously malign people who had no role in the incident in question. It is a pathological compulsion to vilify those they perceive as their foes. That’s the only way they can justify accusing Obama and Holder of being chiefly responsible for assaults on police in Ferguson. It’s the only way that they can defend alleging that the Attorney General is collaborating with criminals and is a criminal himself.

The conservative media effort to persuade America that racism doesn’t exist requires that they deny any evidence of it, particularly by institutional agencies such as police departments. It is a sort of self-inflicted blindness that turns the world into an Eden where there is only harmony and brotherhood in their deranged vision.

However, they make an exception for those who try to point out that prejudice is still very much with us, and who sincerely work to eliminate it. Those are the real racists, according to Fox News and the right, for having the gall to call out bigots. If only they would keep their mouths shut no one would have any problem with racism. Certainly the white, male, Christians wouldn’t have any problems. And that’s the American way, isn’t it?

4 thoughts on “Obama Did It: Fox News Blames Cop Shooting In #Ferguson On President And Attorney General”