The religiously inspired opponents of marriage equality have blamed society’s gradual acceptance of more expansive civil liberties as the trigger for innumerable catastrophes and natural disasters. The range of horrors that they claim are the result of granting more freedom to Americans to live their lives as they chose run from hurricanes to wars to epidemics. These are the lengths that crazy people obsessed with pseudo-religious fervor will go to demonize the objects of their hateful crusade. 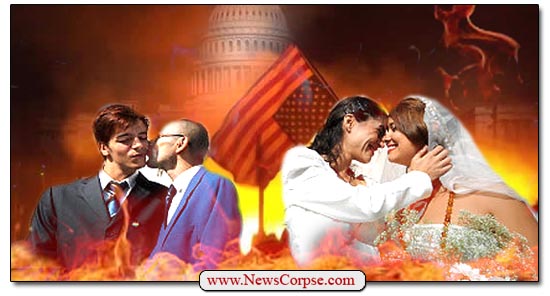 So what about the people who are not crazy? On last night’s Nightly Show with Larry Wilmore (video below), the host cited a report that claimed that same-sex marriage would produce 900,000 more abortions in the next thirty years. That must be because of all the unwanted pregnancies among gay couples. Wilmore explained that this inane theory was what happens when “people who don’t believe in science try to do math.” However, the important thing to note about this claim is that it was not made by the Westboro Baptist Church (aka the “God Hates Fags” tabernacle), but by a group of a hundred conservative attorneys and academics who filed their opinion in a brief to the Supreme Court. In addressing the absurdity of these claims, Wilmore entered into this exchange with former press secretary to George W. Bush and current Fox News host, Dana Perino:

Wilmore: These are things that people actually blamed the gay marriage on. These are true: Hurricane Sandy, Sodom and Gomorrah, the Northridge earthquake, mass animal deaths, and September 11th was also blamed on gay marriage.
Perino: All the things you mentioned that people are absurdly saying that gay marriage has caused, people have also said that global warming is causing. They’re almost interchangeable at this point.
Wilmore: Global warming caused 9/11?
Perino: Oh yeah, there are people who say that. Because of the unrest in the Middle East. And then you have the drought. Yes, believe me.

Perino is no Glenn Beck (who said this week that gay marriage will also cause church attendance to decline by 50% in the next five years), but she has managed, in that brief exchange, to dismiss the gay bashing nut cases by suggesting that everybody does it, while simultaneously associating Climate Change with the same coterie of crackpots who think God is punishing America for its descent into sin. Note that the gay marriage doomsayers are faith-based purveyors of myth, but those warning of the harmful effects of Climate Change are scientists. In the contest of credibility, who would you trust: Rush Limbaugh or Prof. Neil deGrasse Tyson?

As the time nears for the Supreme Court’s ruling on marriage equality, the religious right is convinced that it also represents the nearing of the End Times. Conservative wingnut Alan Keyes called a decision upholding the right of all Americans to marry “a just cause for war.” Likewise, Rev. E.W. Jackson, a frequent guest on Fox News, declared that Christians “must enlist in this war” and be prepared to “give our lives.” But all of that may be unnecessary if Rick Wiles is right:

“America will be brought to its knees, there will be pain and suffering at a level we’ve never seen in this country. The word that I hear in my spirit is ‘fire.’ I do not know if it refers to riots or looting or war on American soil or a fireball from space.”

A fireball from space? Now THAT sounds like global warming.