The Republican Party has its fourteenth official candidate to be their nominee for President of the United States. This morning Chris Christie made his announcement from his hometown in New Jersey. Christie joins a parade of hopefuls, none of whom have succeeded in igniting much enthusiasm on the part of GOP voters. Christie enters the race at 2% (according to a Fox News poll) in a field whose leader, Jeb Bush, has a pitiful 15%. And he has some weighty baggage. 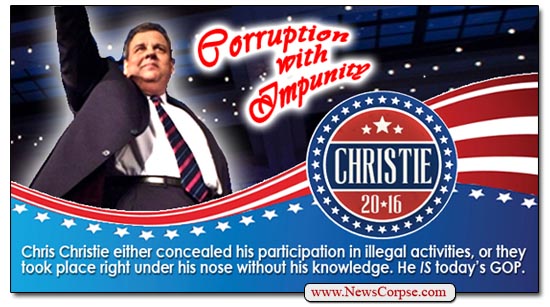 Most of Christie’s speech was focused on his family history and the struggles faced by his two single-parent grandmothers who raised his parents. Other than that, he spoke of his mythical reputation as a frank-speaking truth-teller. He didn’t offer a single specific regarding the platform for a Christie administration. And he left out the fact that his state has had a record nine credit rating downgrades during his tenure.

Christie’s campaign theme of “Telling it like it is,” is ironically one of the most dishonest presentations in modern politics. There is very little to substantiate the claim of straight-talk attributed to Christie. What the media seems to be mistaking for candor is actually Christie’s tendency to be crude, vulgar, and insensitive to common civil behavior. But insulting constituents, berating reporters, and in general being verbally abusive in public is not the same thing as telling it like it is.

The arrogant brutishness evident in Christie’s so-called personality makes it easy to believe that he would order a major bridge closure to retaliate against a mayor who was not sufficiently obsequious. Why would someone like Christie care about who was harmed? And while he still denies any role in that unlawful and potentially dangerous act of revenge, the fact that so many close members of his staff were involved can only mean that he is either lying or incompetent.

Currently Christie does not meet the requirements established by Fox News to participate in the upcoming GOP debate. That leaves him out of a group that includes Donald Trump, Carly Fiorina, and Ben Carson. It’s hard to see a path to victory for Christie if some his party’s biggest jokes are pushing him out of contention. And he has his work cut out for him anyway since the Tea Party fruitcakes still haven’t forgiven him for embracing President Obama following the hurricane that devastated much of his state. That is what likely has resulted in his polling second only to Trump on the question of “Who would you never vote for?”

That’s a far fall from grace for candidate who once topped the polls and was personally solicited to run by Fox News CEO Roger Ailes. Setting aside that gross ethical breach by an alleged “news” operation, Christie will still enjoy Fox’s favor when he visits Sean Hannity tonight for his first post-announcement interview, just as Ted Cruz, Rand Paul, and Marco Rubio did before him. So welcome to the Clown Car, Gov. Christie. And as they, buckle up, it’s gonna be a bumpy ride.

7 thoughts on “Chris Christie: Telling It Like It Is – If “IT” is Vulgar, Tactless, And Rude”