On the day that phony real estate magnate Donald Trump announced that he is running for president of the United States he made the first of what will surely be many boneheaded and offensive remarks. And ever since he maligned Mexican immigrants as rapists and criminals he has faced the wrath of decent Americans who find such bigotry unacceptable.

In less than two weeks Trump has seen his Miss USA/Universe beauty pageant bumped from broadcasts on both NBC and Univision. Other media enterprises including Telemundo and Televisa have also cut ties with Trump. The latest of his business relationships to collapse is his clothing line at Macy’s who, like the others, say that Trump’s values do not represent those of their company (or their species). 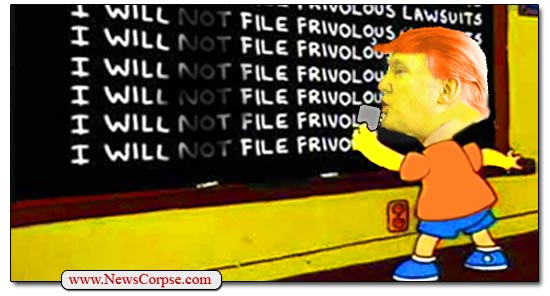 And in a hysterical display of delusion, Trump says that he broke off the relationship with Macy’s. He even criticized the fact that his products were largely manufactured in China, a fact which he defended a couple of weeks ago on CNN’s State of the Union by blaming China for his decision to do business there, rather than in the U.S. It’s an excuse he has been making for years, as evidenced by this hilarious two year old clip from The Late Show with David Letterman:

In response to his critics, Trump is demonstrating the sort of immaturity that disqualifies him for public office by throwing a temper tantrum as he refuses to apologize for his repulsive comments. In fact, he has spent the last couple of days reaffirming his rank prejudices. And now he claims to have filed a $500 million lawsuit against Univision. But is he also going to sue NBC and Telmundo and Televisa and Ricky Martin’s charity foundation (which has moved its golf tournament out of Trump’s course in Puerto Rico) and all of the celebrity participants who have quit his pageants and Macy’s too? You have to wonder when he will have time to run for president.

This is just the beginning. Fair-minded people and responsible businesses will continue to distance themselves from Trump. The next big player ought to be the PGA which is currently scheduled to host its PGA Grand Slam of Golf (October 2015), the 2022 PGA Championship, and the 2017 Senior PGA Championship (presented by KitchenAid) at Trump golf courses. There are plenty of other world-class facilities to hold these events. The Golf Channel (which is owned by NBC) should also reconsider whether to broadcast any event that originates from a Trump property. [See update below]

Of course, as the list of those who “Dump Trump” grows, so will the list of potential litigants for Trump to file against. The GOP already has three candidates who are the subjects of ongoing criminal investigations (Scott Walker, Rick Perry, and Chris Christie). Trump himself has been charged with criminal violations of defrauding students of his fake Trump University. It would be particularly unseemly for him to become embroiled in more litigious controversies of his own making. Yet that is exactly what Trump is doing, and it only took him two weeks into his campaign to achieve this distinction. I can’t wait to see what the next two weeks bring.

[Update: (This was fast)] Donald Trump was interviewed on the Golf Channel today and told them that “I’ve had tremendous support from the golf world, because they all know I’m right.” Well, not exactly. Shortly thereafter the four major golf organizations issued a joint statement contradicting Trump’s arrogant assertion of support:

“In response to Mr. Trump’s comments about the golf industry ‘knowing he is right’ in regards to his recent statements about Mexican immigrants, we feel compelled to clarify that those remarks do not reflect the views of our organizations. While the LPGA, PGA of America, PGA Tour and USGA do not usually comment on Presidential politics, Mr. Trump’s comments are inconsistent with our strong commitment to an inclusive and welcoming environment in the game of golf.”

The statement does not make clear whether these organizations will cancel tournaments scheduled for Trump courses, but the pressure is on. The National Hispanic Media Coalition says it will call for a boycott of PGA events if they do not end their business relationship with Trump.

[Update: 7/7/2015] The PGA has severed ties with Trump on their Grand Slam of Golf which was scheduled to be held at Trump’s Los Angeles course in July. Also, ESPN is moving their Celebrity tournament from Trump’s L.A. course to another one nearby. And Trump continues to refuse to reconsider his bigoted comments, or to apologize.