It seems inconceivable that yet another mass shooting has occurred in a public space filled with innocent people. The frequency and fatality of these events appear to be increasing. And, sadly, the efforts by partisans on both sides to find a political advantage is troubling, but unavoidable.

While the human tragedy is of paramount concern, particularly in the first few hours after the assault is over, there are real issues that have to be addresses in any discussion of the most important subject: How to prevent these tragedies from happening again. In that regard, the only thing that makes sense is to pursue real policies to mitigate the risks and intercept the perpetrators before they can cause harm.

Unfortunately, the political divisions in this country make that nearly impossible, even though there are some solutions that both sides agree on. A majority of Americans favor universal background checks, limiting magazine size, enhancing mental health screening, prohibiting people on the terrorist watch list from purchasing guns, and several other measures that, while not a panacea, are an improvement over what we have now. Even majorities of conservatives and NRA members favor most of these ideas.

Emerging as perhaps the biggest obstacle to progress is, not surprisingly, Fox News. Fox has long been a factor in exacerbating political division in America. And today they made a concerted effort to drive Americans farther apart. Throughout the day they fanned the flames of outrage over a headline from the New York Daily News that said “God Isn’t Fixing This.” 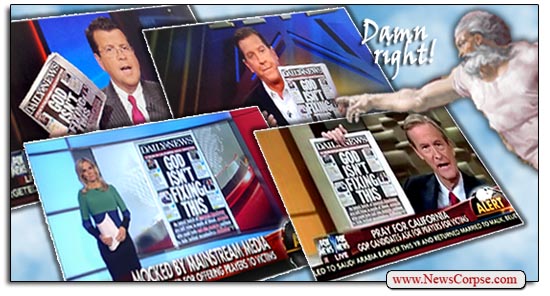 To most rational people that is a fairly obvious truth. After every one of these shootings, politicians and pundits climb all over themselves to offer their “thoughts and prayers.” If praying were going to have any effect on this, ISIS would already be a deranged and distant memory. By focusing on the ludicrous notion that prayer represents a reasonable response to terrorism, Fox is transforming itself into a televangelist operation. Program after program, hour after hour, Fox repeated this story, holding up the Daily News front page to drive home their sanctimonious fury.

What could Fox News possibly hope to gain by making this a staple of the news reporting for the whole day. It does nothing but take time from more practical analyses of the array of potential solutions. And that is, in fact, what Fox News hopes to gain. They are deliberately evading thoughtful dialog on the causes and cures for the rampant gun violence our nation is enduring. It is blatant pandering to the most fringe elements of the right-wing and the NRA nutcases who are opposed to solutions.

Whenever you hear an NRA-theist claim that the best way to deal with mass shootings is make sure more people are armed, remember that the NRA is a manufacturer’s representative whose mission is to promote the sales of more guns. They benefit handsomely from events like these. There are always stories following a mass shooting about how gun sales skyrocketed to record levels in the aftermath. And since there are already more guns in America than people, if the abundance of guns were going to reduce the incidence of gun violence, there would already have been some evidence of it.

Gun advocates argue that if more people were armed they would be engaging in shootouts with criminals. The truth is that, in the country with the most heavily armed populace, there has never been an incident where an armed civilian stopped a mass shooting. The argument doesn’t even make much sense because an armed civilian would be no match for a mass murderer who shows up with body armor and semi-automatic assault weapons. In such a situation, the civilian’s bullets would bounce off of the perpetrator, but would gain his attention, making the civilian shooter the next victim.

Police protection is the second best way to avoid being a casualty. The first best is to prevent the mass shooting before it begins. That’s something that can be done if people in positions of authority would get off their asses and work together on practical solutions. It will not get done with prayer, no matter how many times Fox News runs the same story insisting that God will rescue us from this epidemic of gun violence.