The unlikely candidacy of Donald Trump for the Republican nomination for president just keeps getting more bizarre with each new day. This is a candidate who has already insulted Latinos as rapists and murderers, described women as stupid and ugly, he’s cheered on supporters who assaulted African-Americans and the homeless, proposed forcing Muslims to wear IDs and be tracked in databases, and has lied so often that it’s getting hard to keep track of it all (see the Donald Trump Bullshitopedia for an ongoing attempt to catalog). 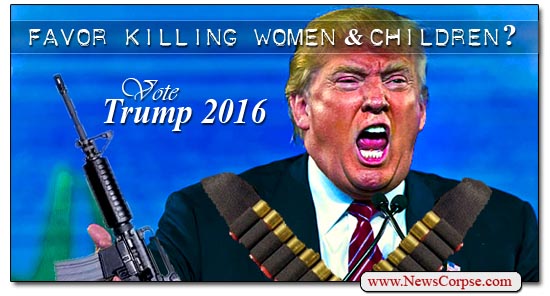 Today Trump hit another new low. While discussing the conflict with ISIS on Fox & Friends this morning, Trump enthusiastically bragged about his ideas for defeating the terrorist group. He told the kids on the Curvy Couch that…

No doubt this display of false bravado will delight his dimwitted disciples. There is nothing they like more than reckless calls for indiscriminate violence and mayhem against manufactured foes. And consistent with his flagrant ignorance on pretty much any subject, Trump is once again proving how disastrous a Trump presidency would be.

The problem with targeting the families of suspected members of ISIS, aside from the obvious moral depravity, is that it is against international law. The Geneva Convention, a treaty developed to set standards for humane treatment of people caught up in hostilities, and to which the United States is a signatory, addresses this specifically (Article 3:1(a)) saying that…

“Persons taking no active part in the hostilities…shall in all circumstances be treated humanely […] To this end, the following acts are and shall remain prohibited: Violence to life and person, in particular murder of all kinds, mutilation, cruel treatment and torture.”

Consequently, Trump is proposing to commit war crimes by deliberately targeting non-combatant family members. He regards this as a justifiable alternative to complying with the principles of the Geneva Convention, which he characterizes as too “politically correct.” But in addition to making the United States a practitioner of crimes against humanity, Trump is also validating the tactics of the terrorists who routinely target non-combatants. This would give the terrorists justification for their evil acts and remove any moral high ground we might have otherwise had. That plays into the hands of the terrorists who could then use it as an effective tool for recruiting more terrorists.

Coming from Trump, this idiocy further establishes that he is utterly incapable of governing the country. It is further proof that he is nothing but a diplomatic neanderthal who would insult and alienate our allies and foes alike. He recently expressed his support for waterboarding, an interrogation technique that the rest of the world regards as unlawful and inhumane torture.

And if all of that isn’t enough evidence that Trump is downright dangerously inept, then consider his interview this morning with conspiracy nutcase Alex Jones. Trump spent most of the interview hawking his book and effusively praising Jones. You might wonder which of Jones’ theories Trump likes best. Is it that 9/11 was an inside job; or that Hurricane Katrina was a test run for FEMA concentration camps; or that the government is using chemicals to create gay people; or that Obama is the devil?

The question that really needs to be answered is: What chemicals are causing people to support Donald Trump for president? And is there an antidote?